China has recovered precious lunar samples after a successful reentry and landing of the Chang’e-5 return capsule.
SpaceNews 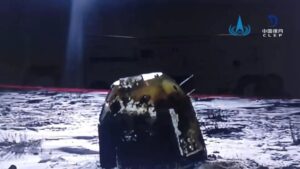 HELSINKI — China has recovered precious lunar samples after a successful reentry and landing of the Chang’e-5 return capsule.

The roughly 300-kilogram Chang’e-5 return capsule performed a ballistic skip reentry at 12:33 p.m. Eastern Dec. 16, effectively bouncing off the atmosphere over the Arabian Sea before reentry.

The capsule containing around 2 kilograms of drilled and scooped lunar material landed in the grasslands of Siziwang Banner at 12:59 p.m. Recovery vehicles located the capsule shortly after.

The recovery ends the space segment of the 23-day Chang’e-5 mission which aimed to collect rock samples thought to be billions of years younger than so far delivered by the U.S. Apollo and Soviet Luna missions.

While the samples will be delivered to a specially constructed laboratory in Beijing for preparation, analysis and storage, Chang’e-5 opens doors for further exploration.

The verification of technologies for liftoff from the lunar surface and automated rendezvous and docking in lunar orbit open the way for planned sample-return missions to near Earth asteroids and Mars in the coming decade, as well as crewed lunar landings in the 2030s.

Chang’e-6, a backup mission, will now be repurposed for a landing at the lunar South Pole or South Pole-Aitken Basin. The mission will involve contributions from CNES of France.

The Chang’e-5 orbiter performed a burn following separation of the return capsule to avoid reentering the atmosphere. The orbiter could now be used for an extended mission, utilizing imagers on the spacecraft.

Verification of the age of the samples would confirm ideas that some areas of the moon experienced late-stage volcanism, and compositional analysis could provide insights into the reasons behind it.

Katherine Joy, a Reader in Earth Sciences at the University of Manchester says the samples might represent some of the last lunar lava flows to have erupted. “If so, they not only tell us about how the Moon’s thermal history but these are also vital samples to help us calibrate the Moon’s impact history.”

Joy states that calibrating this young part of the Moon’s impact record would have “important implications for understanding the surface ages of all other bodies in the Solar System.”

Jessica Flahaut, a planetary geologist at the University of Lorraine, France, says the mission is”so great for the science community, who has been waiting to get more samples from decades—the last sample return being Luna 24 in 1976—that the Moon is getting more attention again.”

Flahaut notes that the the drilled samples, consisting of 0.5 kilograms of the material will provide further windows on en we will have a record of paleo-regolith layers in the drill core samples, and we could use those to survey the record of the solar winds and galactic events over millions of years.”

“Remote sensing data from the last decades have also shown a number of curiosities, including felsic domes, irregular mare patches, and rock types at the lunar surface, which we don’t have in the sample collection yet. It is therefore key to insist that lunar exploration is still only at its beginning, and that there is much more to do.”

An unprecedented automated lunar orbit rendezvous and docking with the mission service module two days later allowed the transfer of the 2 kilograms of material into the return capsule.

The mission was China’s most complex so far in terms of robotic space exploration. Initially envisioned as the third of three steps to orbit, land on and sample the moon, Chang’e-5 and the previous successful Chang’e missions give way to an expanded lunar exploration program.

The extended phase of lunar exploration involves the Chang’e-7 and 8 lunar landing missions in the coming years. The aim will be to establish an ‘international lunar research station’ in the mid-to-late 2020s as a precursor to crewed landings.

Sample return technology and experience developed through Chang’e-5 is also to be utilized for planned near Earth asteroid and Mars sample return missions later in the decade. The complexity of the Chang’e-5 mission profile is considered by observers to be related to future crewed lunar landing ambitions.