China has rolled out a Long March 8 to the pad for the first launch of a rocket that will later be adapted for vertical landing and reuse.
SpaceNews 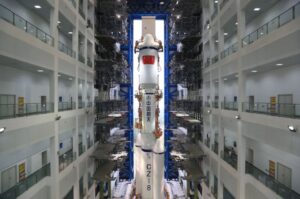 HELSINKI — China has rolled out a Long March 8 to the pad for the first launch of a rocket that will later be adapted for vertical landing and reuse.

The launch may be the last action for China in a year that has seen the country’s first independent interplanetary mission, a test mission for space station launches and a lunar sample return, all launching from the new coastal Wenchang spaceport. China also conducted a secretive test flight of what was believed to be a fixed wing, reusable spaceplane.

The Long March 8 is designed to fill a gap in medium launch capabilities to Sun-synchronous orbit (SSO) and missions to geosynchronous transfer orbits (GTO). Chinese media state the launcher can lift 5 tons of payload to GTO and 2.8 tons to SSO.

While the first launch is expendable, the Long March 8R variant will be adapted for first-stage reusability in the future.

The launch is expected to carry a classified technology test satellite developed by the China Academy of Space Technology (CAST). Four smaller payloads will also be aboard.

These include the Ethiopian ET-SMART-RSS 6U nanosat, developed in partnership with commercial firm Beijing Zhixing Space Technology Co. Ltd., also known as Smart Satellite. Other commercial satellites are expected on the flight.

The mission will be China’s 38th launch of pandemic-hit 2020. This includes two failures of Long March rockets and two failures of Kuaizhou solid rockets developed by a state-owned conglomerate.

The Long March 8 was developed and built by the China Academy of Launch Vehicle Technology (CALT), a subsidiary of state-owned defense contractor China Aerospace Science and Technology Corp. (CASC).

The first stage is based on the Long March 7, which is also powered by YF-100 kerosene-liquid oxygen rocket engines.

A three-stage variant for launches to GTO, the Long March 7A, suffered a failure in its inaugural launch in March this year. It also inherits the 3-meter-diameter hydrolox third stage from the Long March 3A.

The Long March 8 is also expected to be used to verify vertical takeoff, vertical landing technology for CASC. This is an apparent part of a long-term plan for upgrading launch capabilities.

Animations of the flight profile released by CASC suggest the so-called Long March 8R would use retropropulsion to land on a sea platform with side boosters still attached to the core.

CASC is developing the YF-100K engine, believed to have the variable thrust capacity to facilitate powered descent and landing. It has already tested grid fins, while the Long March 2C and Long March 6 are expected to be involved in related testing.

In the commercial sector Beijing-based Landspace and iSpace are developing methalox rockets capable of landing using variable thrust engines. The latter plans hop tests in 2021 followed by a first launch of its Hyperbola-2 rocket.

First launch of Landspace’s Zhuque-2 is currently expected mid-2021, but its first launch will be expendable.