China has quietly rolled a new-generation Long March 7A rocket at Wenchang ahead of a launch as soon as late March 10 Eastern.
SpaceNews 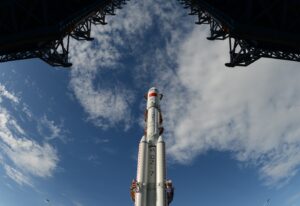 HELSINKI — China has quietly rolled a new-generation Long March 7A rocket at Wenchang ahead of a launch in the coming days.

The 60-meter-long kerosene-liquid oxygen fueled Long March 7A was rolled out late March 7 Eastern. Launch could take place as soon as late March 10 Eastern from the coastal Wenchang launch center.

The rocket will be the second Long March 7A launch attempt, aiming to place a large satellite into geosynchronous transfer orbit (GTO). It follows a failed first mission in March 2020.

The mission is expected to be carried out in a fairly furtive manner. The rollout out of the rocket was revealed by images posted on Chinese social media March 8 and reposted on Twitter.

Chinese space authorities have hinted at the mission without making an open declaration of the launch time nor payload. Previous classified missions have included “technology verification” series satellites.

China has not yet issued navigational safety warnings which would indicate launch time and trajectory. No such notifications were released for the previous Long March 7A, meaning not even an approximate time of launch may be available before liftoff.

However road closures issued (Chinese) by Wenchang authorities March 8 indicate that the launch will take place between 7 p.m. March 10 and 7 p.m. March 11 Eastern.

No official account of the failure of the first launch has been published. However an article published by a space reporting portal following the Long March 8 debut flight in December states a loss of pressure followed first stage separation, leading to an explosion and loss of the mission.

The rocket components were delivered to Wenchang in mid-January by the specially designed Yuanwang-22 cargo belonging to the China Satellite Launch and Tracking Control General.

The Long March 7A is a variant of the standard Long March 7. The latter has flown twice and is designed primarily to launch cargo spacecraft to China’s space station.

The new 7A launcher uses the same 3.35-meter-diameter kerolox core and four 2.25-meter-diameter side boosters. It includes an additional hydrolox third stage adopted from the older generation Long March 3B rocket to allow it to send payloads to GTO.

The 3B launches from deep inland at Xichang, Sichuan province, and sees spent stages fall on inhabited areas. The Long March 7A launches from the coastal Wenchang spaceport. This means its flight path is over the sea, and could alleviate the dangers and costs associated with Long March 3B debris.

It is one of a number of new-generation kerolox and hydrolox rockets developed by China over the past decade. These include the Long March 5, 6, 7 and 8 series of rockets.

The new generation rockets are expendable. However the Long March 8 is being developed into a launcher with a recoverable and reusable first stage.

A Long March 5B is currently being assembled at Wenchang to launch the first module for China’s space station. Launch is estimated to take place in mid-late April.