The Chinese and Russian space agencies signed a memorandum of understanding Tuesday on construction of an international lunar research station.
SpaceNews 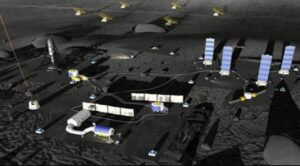 HELSINKI — The heads of the Chinese and Russian space agencies signed a memorandum of understanding Tuesday on cooperative construction of an international lunar research station.

Statements from Roscosmos and CNSA underline that the project will be “open to all interested countries and international partners.”

Though not explicitly stated it is understood that the ILRS would be constructed at the lunar south pole.

The releases also state that both sides will use their accumulated experience in space science, research and development and use of space equipment and space technology to jointly develop a road map for the construction of an international lunar scientific research station.

Roscosmos notes the prospect of a human presence on the moon following the robotic phase of the project.

The signing of the agreement had been expected, as reported by SpaceNews in February.

“This MoU fits the larger trend, which is Russia moving into a closer orbit with China,” Bleddyn Bowen, a lecturer in international relations at the University of Leicester in the United Kingdom, told SpaceNews in February.

China and Russia have previously signed agreements for cooperation on the Chang’e-7 and Luna 27 missions and a joint data center for lunar and deep space exploration.

The European Space Agency has also been involved in discussions, while recently having signed an MoU with NASA on the Gateway.

“At ESA we are following the Chinese lunar exploration plans very closely in order to see where our respective programmatic interest could meet, primarily the CE-6, -7 and -8 missions but also the ILRS initiative”, Karl Bergquist, ESA’s international relations administrator, told SpaceNews last year.

The ILRS concept is an evolutionary, expanded stage of Chinese lunar exploration following the approval of a first set of missions in the early 2000s. China has launched two lunar orbiters, a pair of lander and rover missions and, in late 2020, the complex Chang’e-5 lunar sample return mission.

Chang’e-6, a polar sample return mission, and the multi-spacecraft Chang’e-7 are scheduled for around 2023-2024. The later Chang’e-8 mission will be designed for in-situ resource utilization and 3D-printing technology tests, as well as life science related to potential long-term stays on the moon. These missions will form the robotic basis of the ILRS before expansion into a more long term base.

Russia is preparing to launch its Luna 25, Luna 26 and Luna 27 lunar lander missions across the 2020s.

The early stage ILRS would appear to consist of a number of discrete spacecraft, in contrast to a more complex, integrated program such as the International Space Station.

A Chinese space station, with construction to begin as soon as April, is planned to bring China expertise and experience in human spaceflight operations ahead of potential crewed lunar missions.