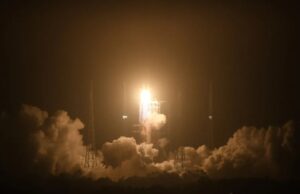 The payload was the Shiyan-9, or “experiment-9”, technology verification satellite. It was developed by the China Academy of Space Technology (CAST), a CASC subsidiary.

The satellite will be mainly used for in-orbit verification tests of new technologies such as space environmental monitoring, CASC stated, without providing further details.

The Long March 7A is a 60.1-meter-long, 3.35-meter-diameter kerosene and liquid oxygen launch vehicle with four side boosters, capable of delivering up to 7 metric tons of payload to GTO.

The launcher draws on new kerosene engine technologies along with a stage modified from the older Long March 3B series, China’s current workhorse rocket, boosting China’s launch options to GTO.

The Long March 7A is more capable than the Long March 3B, which can launch 5.5 tons to GTO. By launching from the coast, it also does not incur the cost and hazards of the inland 3B launches.

CASC plans to carry out 3-5 Long March 7A launches a year by 2025.  The first launch of the Long March 7A failed in March 2020. A loss of pressure occurred after first stage separation, which led to engine malfunction.

The Long March 7A is a variant of the standard Long March 7. The latter has flown twice and is designed primarily to launch cargo spacecraft to China’s space station.

The 7A uses the same kerolox core and four 2.25-meter-diameter side boosters. It includes an additional hydrolox third stage adopted from the older generation Long March 3B rocket to allow it to send payloads to GTO.

The launcher has a takeoff mass of 573 metric tons according to the China Academy of Launch Vehicle Technology (CALT). It uses 120-ton-thrust YF-100 and 18-ton-thrust YF-115 engines burning kerosene and LOX on the first, second and booster stages. Two 8-ton thrust YF-75 engines burning liquid hydrogen and liquid oxygen power the third stage.

It is one of a number of new-generation kerolox and hydrolox rockets developed by China over the past decade. These include the Long March 5, 6, 7 and 8 series of rockets.

The new generation rockets are expendable. However the Long March 8 is being developed into a launcher with a recoverable and reusable first stage.

A Long March 5B is currently being assembled at Wenchang to launch the first module for China’s space station. Launch from Wenchang is estimated to take place in mid-late April.

Thursday’s launch was China’s sixth of 2021. CASC aims to launch more than 40 times across the year, with other, commercial Chinese launch service providers also planning a number of missions.