China is to establish a commercial spaceport in the coming years to support the rapid growth of private space activities in the country.
SpaceNews 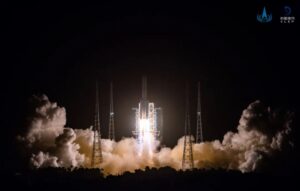 HELSINKI — China will establish a commercial spaceport in the coming years to support the rapid growth of private space activities in the country.

The commercial space launch center was included in a list of national projects in the recently formulated 14th Five-Year Plan which covers 2021-2025.

The project gains approval following both a large increase in launches by the traditional space industry in China and the development of a private space sector in recent years.

Dou Xiaoyu, a deputy to the National People’s Congress (NPC), the top Chinese legislative body, and a vice chairperson at China Aerospace Science and Industry Corp. (CASIC), a giant state-owned enterprise, called for a Chinese commercial spaceport project in order to meet an expected surge in demand for space launch services.

Dou said China needs to strengthen domestic launch site capacity and continuously improve and optimize facilities. She also noted that launch-related policies and regulations have yet to be promulgated and perfected.

CASIC, through its subsidiary Expace, launch Kuaizhou series solid rockets for commercial purposes, both on the open market and for its own projects including a narrowband Internet of Things low Earth orbit constellation, named Xingyun. CASIC is also developing methane-liquid oxygen propellant engines.

The move is not unexpected. The China National Space Administration stated in 2018 that the construction of an open and shared commercial space launch site was being explored (Chinese). The move follows a range of policies designed to facilitate and support China’s emerging commercial space sector, which was opened up to private capital in late 2014.

Startup companies Landspace, iSpace, OneSpace and Galactic Energy have since attempted orbital launches, while Expace and China Rocket, a spinoff from CASC, have also launched rockets. CAS Space, a Chinese Academy of Sciences spinoff, and private firms Deep Blue Aerospace, Linkspace, Spacetrek, Space Transportation and others are working towards launches.

No details of the spaceport project were released. Information regarding location of the new launch center is not known, nor the authority overseeing operations and other matters.

Commercial launch facilities have earlier been proposed close to both Jiuquan and Wenchang (Chinese). Ningbo city has also proposed (Chinese) a launch site as part of plans for a wider aerospace hub in Zhejiang province.

China’s current launch sites include three inland at Jiuquan in the northwest, Taiyuan in the north and Xichang in the southwest of the country and the new coastal Wenchang center on the southern island of Hainan.

Moves to increase launch capabilities have recently been carried out. Xichang last year underwent renovations aimed at improving annual launch capacity from around 17 to about 30 launches.

A new eastern spaceport for supporting sea launches has also been established near Haiyang City on the coast of the eastern province of Shandong. It was constructed to facilitate sea-based launches of solid Long March 11 rockets and commercial launch vehicles from China Rocket, a spinoff from the state-owned China Academy of Launch Vehicle Technology.

New launch complexes for Kuaizhou rockets and methane-liquid oxygen propellant launch vehicles are understood to be under construction at Jiuquan in the Gobi Desert. Private firms Landscape and iSpace are developing the first Chinese methalox rockets and the Zhuque-2 and Hyperbola-2 respectively are expected to see debut launches in 2021 and 2022.

It has so far hosted all private Chinese rocket launches, starting in 2018. These launch vehicles have all so far been light-lift solid rockets. Dou noted that existing facilities are unable to meet demands for high-density and low-inclination launches in the future.

Bao Weimin, a member of the National Committee of the Chinese People’s Political Consultative Conference, the consultative counterpart to the NPC, recently stated that the government would set up a company for overall planning and operation of satellite internet infrastructure.

Details are scarce, but filings with the International Telecommunication Union indicate a constellation of around 13,000 satellites in low Earth orbit.

Other parts of the five-year plan highlighted the achievements in human spaceflight and lunar and deep space exploration. The “outline for the 14th five year plan and long-term targets for 2035” also includes super-heavy and reusable launch vehicles, industrialization of the Beidou system and other civilian and military space-related developments.

A new dedicated space white paper is expected to be published later in 2021.