Chinese large state-owned enterprise CASIC laid out a new set of commercial space plans for the next five years at a conference Monday.
SpaceNews 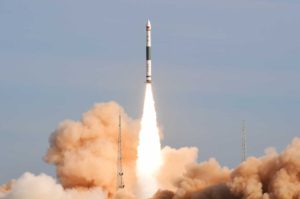 HELSINKI — Chinese large state-owned enterprise CASIC laid out a new set of commercial space plans for the next five years at a conference Monday.

“In the next five years CASIC will improve the capability of the commercial aerospace system, shorten the preparation time for and enhance the frequency of commercial rocket launches, and conduct further research into the reuse of launch vehicles to lower costs, said Fu Zhimin, a chief technologist at CASIC.

Fu stated that the group plans to double the number of launches of its Kuaizhou series rockets by 2023 and lead the world in solid rocket technology by 2025.

More than ten Kuaizhou rocket have launched so far. The most recent launch of the Kuaizhou-1A and the inaugural flight of the larger Kuaizhou-11 failed earlier this year. No updates on the status of these launchers were apparently provided.

Demonstration and verification of the Tengyun horizontal takeoff, horizontal landing (HTHL) spacecraft is to be completed by 2025. Tengyun is understood to be unrelated to an apparent September ‘reusable experimental spacecraft’ test launched by a Long March 2F.

Tengyun will, according to previous reports, be capable of carrying both crew and cargo to orbit. It will also be able to release satellites into orbit. Zhang Hongwen of CASIC’s third research institute said in 2018 that the research was at an early stage.

CASIC intends to preliminarily finish the construction of the Xingyun project, an 80-satellite LEO narrowband Internet of Things constellation, by 2025. The group aims to launch 12 Xingyun 2-series satellites in 2021.

CASIC is seen as a sister company to the China Aerospace Science and Technology Corp. (CASC), which is the main contractor for the country’s civilian and military space efforts.

The space endeavors of CASIC—a group consisting of six research main research institutes, a range of subordinate companies and units and a total of around 150,000 employees—are meanwhile seen as commercial and somewhat separate from the national space programs.

‘Satellite Internet’ was added to a list of “new infrastructures” to receive government support at a meeting in April. The move apparently helped generate investment in related companies.

The CASIC-led Wuhan National Aerospace Industry Base has also officially begun operations. The rocket production park covers an area of 30 hectares and has the capacity for the assembly and testing of 20 solid-fueled rockets per year. The park is expected to reach a capacity of 50 rockets per year in the future.

The Kuaizhou-1A, operated by Expace, a commercial CASIC spin-off, consists of three solid stages and a liquid propellant upper stage. It is capable of lofting a 200-kilogram payload into a 700-kilometer sun-synchronous orbit (SSO).

The Kuaizhou-11 is a larger version of the Kuaizhou-1A. The rocket has a diameter of 2.2 meters, a mass at liftoff of 78 tons. It is capable of delivering 1,000 kilograms to a 700-kilometer SSO.

Four-meter-diameter Kuaizhou-21 and -31 solid rockets designed to carry up to 20,000 and 70,000 kilograms to LEO respectively are in development. Debut launches were earlier projected for the middle of the 2020s and after.

The park will also facilitate product design, component manufacturing, and assembly and testing for 100 to 200 satellites annually across the next five years, according to Fu Zhimin.

Kuaizhou rockets will face competition domestically. Sister giant SOE CASC also produces its own solid rocket, the Long March 11. The rocket can launch from inland and also from a specially developed sea platform. Long March 11 rockets and Jielong rockets developed by CASC commercial spinoff China Rocket Co. Ltd. will also be produced at a new production facility on the coast of Shandong province for sea launches.