Launch of a Kuaizhou-1A satellite carrying a remote sensing satellite has ended in ambiguity and likely failure following liftoff from Jiuquan.
SpaceNews 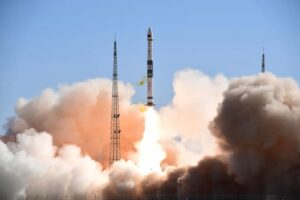 The Kuaizhou-1A solid rocket lifted off from a transporter erector launcher at Jiuquan in the Gobi Desert at 01:02 a.m. Eastern Saturday. Amateur footage of the apparent launch appeared on Chinese social media shortly after.

Chinese launches to low-Earth and Sun-synchronous orbits are usually confirmed successful within an hour of liftoff. State media provided official confirmation of the failure (Chinese) five hours after launch. The terse report stated that the specific reasons for the launch anomaly are being further analyzed and investigated.

The launcher was carrying the Jilin-1 Gaofen (‘high resolution’) 02C optical Earth observation satellite. The satellite was understood to have 0.76-meter resolution capabilities with a swath width of 40 meters.

Saturday’s mission was the fourth Chinese failure of 2020 from 26 launches. Inaugural launches of the Long March 7A and the Expace Kuaizhou-11 failed, while an issue with the workhorse Long March 3B led to the loss of the Indonesian Palapa-N1 communications satellite.

The launch anomaly also brings into question two further Kuaizhou-1A launches planned for September 17 and 22. Airspace closure notices were issued for all three launches in recent days. In 2020 three U.S. launches (also including new LauncherOne and Astra rockets) and an Iranian orbital launch attempt have also ended in failure.

Kuaizhou-1A rockets are operated by Expace, a nominally commercial company. It is however owned and backed by the China Aerospace Science and Industry Corp. (CASIC), a giant state-owned enterprise, missile-maker and defense contractor.

The Kuaizhou-1A, understood to be derived from missile technology, consists of three solid stages and a liquid propellant upper stage, and is capable of lofting a 200-kilogram payload into a 700-kilometer sun-synchronous orbit (SSO).

Jilin-1 Earth observation satellites are developed and operated by Changguang Satellite Technology Co. Ltd. (CGST). CGST is a commercial offshoot of the state-owned Changchun Institute of Optics, Fine Mechanics and Physics under the Chinese Academy of Sciences.

Saturday’s launch was the first failure in ten flights for the Kuaizhou-1A. The launch was the second failure in a matter of hours, following termination of the Astra Rocket 3.1 vehicle during its first-stage burn.