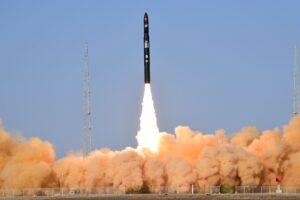 The Ceres-1 four-stage solid rocket lifted off from the Jiuquan Satellite Launch Center near the Gobi Desert at 2:12 a.m. Eastern Saturday.

Galactic Energy is the fourth Chinese private launch company overall to make an orbital launch attempt, all with light-lift solid launchers. Landspace made the first attempt in October 2018, with OneSpace following in March 2019. In July last year iSpace became the first to successfully achieve orbit with its Hyperbola-1 launch.

The 19-meter-long, 1.4-meter-diameter Ceres-1 can loft 350 kilograms to low Earth orbit or 230 kilograms to a 700-kilometer SOO. It consists of three solid stages and an advanced liquid upper stage.

The addition of “satellite internet” to a list of “new infrastructures” in April by China’s National Development and Reform Commission (NDRC) also led to an apparent increase in funding to commercial satellite companies.

Chinese launch, small satellite and related downstream companies have proliferated in China since a central government policy decision in late 2014 to open portions of the space sector to private capital.

Galactic Energy also recently struck a deal with the southwestern Chinese city of Jianyang, under the administration of Chengdu, for the construction of a rocket research, testing and manufacturing facility. The move is indicative of a level of provincial and municipal support of the new space ventures in China.

Today’s Ceres-1 launch had been planned for the first half of 2020. The COVID-19 outbreak was partly responsible for delays.

Galactic Energy is following the path of Landspace and iSpace in starting with solid rockets but shifting to larger, more complex liquid propellant launchers.

The Pallas-1 kerosene and liquid oxygen launch vehicle is currently expected to have its test flight in late 2022. Like Ceres-1 the launcher is named after a major object in the asteroid belt.

The launcher will be powered mainly by Cangqiong (Welkin) RP-1/LOX engines producing 40 tons of thrust and described by the company as China’s version of SpaceX’s Merlin engine. The company says it has developed innovative designs and procedures to reduce costs and allow multiple engine reuses.

Pallas-1 is designed to carry four metric tons to LEO or two tons to a 700-kilometer SSO. That makes it comparable to Landspace’s planned Zhuque-2 methalox launcher, both of which will be more capable than iSpace’s Hyperbola-2. All three launchers are planned to be capable of vertical takeoff, vertical landing.