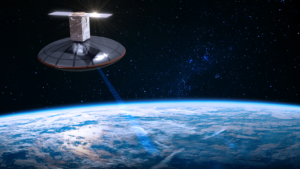 “We are building the first of its kind proprietary satellites equipped with radar, and launching them into space to improve weather monitoring and forecasting capabilities,” Shimon Elkabetz, ClimaCell CEO and co-founder, said in a statement.

Boston-based ClimaCell plans to monitor global weather with mini-fridge-size satellites scheduled to begin launching into low Earth orbit next year. ClimaCell is developing the weather radar and hiring another company to provide the satellite bus.

As part of the new project, called Operation Tomorrow Space, ClimaCell will “enhance our forecasting capabilities for our existing customers, and expand to more,” ClimaCell spokeswoman Mira Marcus said by email. “The data will be ingested into our proprietary weather models and provided via our [software-as-a-service] platform to end-users. We will also work with a select group of governmental agencies and provide both raw data as well as model outputs.”

“To put into perspective the physical transformation of ClimaCell’s satellites, the company has reduced the size of existing weather satellites from the size of a school bus – considered industry standard until now – to the size of a miniature refrigerator,” the news release added.

ClimaCell “is aspiring to become the largest weather enterprise in the world,” according to a Feb. 24 blog post. “We started with proprietary sensing and modeling to predict the weather more accurately at every point in the world, and built on top of it one software platform that can be configured to every job and vertical.”

By operating its own satellite constellation, ClimaCell plans “improve weather forecasting for the entire world,” the blog post added. “For the first time, a constellation of active radar will surround Earth and provide real-time observations to feed weather forecasting at every point on the globe. The results will be improved accuracy of hurricane forecasting, disasters alerts and more, as well as equal weather data in developing and developed countries.