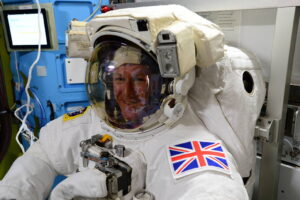 Five years ago today, Maj. Tim Peake stepped off a gangway into a Soyuz rocket, fastened his seat belt and took to the skies from a remote desert in Kazakhstan. As he did so, he took along a photograph of his family and friends, his iPod nano, and the anticipation of a whole country.

As Tim made the eight-minute, 45-second journey away from the Earth’s gravity, the former RAF officer and Apache helicopter pilot wrote his name into our history books, and pub quizzes up and down the land, becoming the first Briton to live on humanity’s most unique science laboratory, the International Space Station.

I am delighted that we are ending this difficult year on a rare high note. These past few weeks have seen rapturous applause for the outstanding achievements of scientists — from our shores and beyond — in helping us find a safe vaccine for COVID-19. And it is a time in which we should also recognize the shot in the arm for science that Tim Peake gave this country.

Tim became our own star in space and used his time to inspire many school children in the UK to believe space is within their grasp and to discover the wealth of opportunities that exist in science, technology, engineering.

During his mission’s 186 days and 11 hours, Tim undertook no fewer than 250 pioneering science experiments, before going on to don the infamous white pressure suit and join the history books once again as he joined the few who can say they have walked in space.

But Tim’s job on the space station went far beyond the experiments.

While onboard Tim took time to host question and answer sessions with school students — giving kids a chance to put their questions to an astronaut floating round the Earth, thousands of miles away, and have answers beamed back down to Earth.

He was able to harness the growing power of social media to capture the public’s imagination, sharing images that reflected the true beauty of the world; allowing us all to vicariously enjoy a thin slice of the heavens on a daily basis.

In the weeks prior to launch, a competition to design the mission badge, led by the BBC’s Blue Peter, generated over 3,000 entries and was won by 13-year-old Troy Wood, who, with talent beyond his years, visualized a design featuring Isaac Newton’s apple and the Soyuz rocket.

Five years on, we know Tim did not leave his legacy in orbit. Since his return he has been a beacon for science and a champion for space, sharing his wonderful experiences as an astronaut to inspire people in myriad ways. He embarked on a nationwide tour with the Soyuz rocket in tow, visited schools across the country and used his platform to encourage us all to ponder a career in space, to take up that science qualification, or register for an amateur astronomy course.

In the first two decades that followed the halcyon days of the space race in the 1960s, one of the great ambitions of many children was not to be a football player, singer or a celebrity, but to be an astronaut or a rocket scientist.

We know that the legacy of Tim’s historic journey similarly captivated people in the UK and we have now launched a campaign to ask people to share their memories of Tim’s mission and their personal reflections.

Inspiring British spacemen and women cannot be a guise for underinvestment. We are serious about turbocharging our research community, which is why we are not just talking a good game, we are investing record amounts in research and development. In the recent Spending Review we committed to invest £14.6 billion ($19.5 billion) in research and development including to support groundbreaking technologies and businesses, for innovation loans to help cutting-edge UK businesses access capital, and to build new science capability and support the whole research and innovation ecosystem.

This is married to big ambitions to make us the first country in Europe to launch satellites in the next couple of years, earning us our stripes as a space nation and giving the UK its very own Sputnik moment.

When Tim reached the International Space Station five years ago, he boldly went where no Briton had gone before. Because of him, I know he will be the first of many.