A March 16 letter signed by 50 House Democrats urges President Joe Biden to reduce the Pentagon’s budget to pay for other activities.
SpaceNews 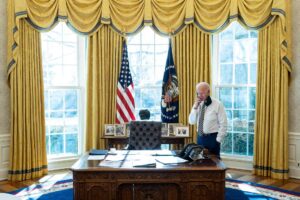 WASHINGTON — A March 16 letter signed by 50 House Democrats urges President Joe Biden to reduce the Pentagon’s budget to pay for other activities.

The letter is intended to influence the president’s budget proposal for fiscal year 2022 which the administration is expected to submit to Congress in early May. According to media reports, Biden intends to request about $704 billion for the Defense Department, which is close to what the Pentagon got in 2021.

The lawmakers asked Biden to “re-evaluate our spending priorities as a nation. That re-evaluation should begin with the Department of Defense. Hundreds of billions of dollars now directed to the military would have greater return if invested in diplomacy, humanitarian aid, global public health, sustainability initiatives, and basic research.”

How any potential cuts would impact the Space Force remains to be seen, said defense and space analyst Todd Harrison, senior fellow at the Center for Strategic and International Studies.

The Space Force’s budget is only 2 percent of the total DoD budget, Harrison said. “I don’t think the Space Force will end up being an area that progressive Democrats want to cut once they realize that the Space Force pays for things like GPS that benefit the overall economy and space surveillance capabilities that underpin arms control treaties.”

The largest Space Force procurement program are the Next Generation Overhead Persistent Infrared (Next Gen OPIR) satellites made by Lockheed Martin and Northrop Grumman. “I think Next Gen OPIR is probably safe from any significant cuts because it is a relatively low profile program, is purely defensive in nature, and adds to nuclear stability by reducing the incentive for an adversary to attempt a first strike,” said Harrison.

Some progressive Democrats have their eyes set on cutting the Air Force’s Ground Based Strategic Deterrent (GBSD) program to develop a new intercontinental ballistic missile. “But there is little to no chance that a cut in GBSD could make it through the Senate,” Harrison said.