A SpaceX Crew Dragon spacecraft with four astronauts on board successfully docked with the International Space Station Nov. 16, a day after launch on the first operational commercial crew mission.
SpaceNews 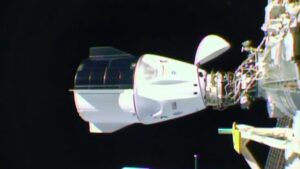 WASHINGTON — A SpaceX Crew Dragon spacecraft with four astronauts on board successfully docked with the International Space Station Nov. 16, a day after launch on the first operational commercial crew mission.

The spacecraft, named “Resilience,” docked with the station’s Node 2, or Harmony, module at 11:01 p.m. Eastern. Hatches separating the station and spacecraft were scheduled to open two hours later.

The spacecraft, with NASA astronauts Mike Hopkins, Vic Glover, Shannon Walker, and JAXA astronaut Soichi Noguchi on board, launched Nov. 15 from the Kennedy Space Center on the Crew-1 mission. Docking took place approximately 27 and a half hours after liftoff from Launch Complex 39A.

The four astronauts on Crew-1 join NASA astronaut Kate Rubins and Roscosmos cosmonauts Sergey Ryzhikov and Sergey Kud-Sverchkov, who have been on the ISS since arriving on a Soyuz spacecraft in October.

Crew-1 marks the beginning of operational flights to and from the ISS on commercial crew vehicles. The spacecraft will remain docked to the station for six months, with the four astronauts returning home shortly after the launch of the Crew-2 mission on another Crew Dragon spacecraft next spring.

“Congratulations, this is a new era of operational flights to the International Space Station from the Florida coast,” Hopkins, the commander of the mission, said shortly after docking.

Besides ending reliance on Russia’s Soyuz spacecraft for getting crews to and from the station, commercial crew vehicles like Crew Dragon will enable the station to support seven-person crews for long-duration missions. NASA has touted the additional science that the additional crewmember will be able to perform.