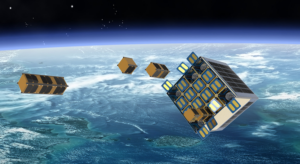 “Many people talk about this upcoming market of in-orbit transportation or last-mile delivery, filling the gap between the drop off condition provided by the launch vehicle and the target orbit relevant for the operational or business purposes of the end users,” Renato Panesi, D-Orbit chief operating officer,  told SpaceNews. “We have been able to fill that gap. We are the first in the world to do that.”

Silicon Valley startup Momentus, Seattle-based Spaceflight and other companies are planning to offer similar services, transporting small satellites from the point where a rocket drops them off in space to their desired orbital destinations. Small satellite developers are eager to sign up for the services because the least expensive way to reach orbit is to ride as a secondary payload on a rocket that may not be traveling to their desired orbit.

After multiple delays, D-Orbit launched its In-Orbit Now (ION) Satellite Carrier Sept. 3 on an Arianespace Vega rocket. On Sept. 25, ION deployed the first of 12 SuperDoves. The last satellite was released on Oct. 28.

“The ION carrier behaved well from the first deployment to the last one,” said Lorenzo Ferrario, D-Orbit chief technology officer. “It is very important for the market and for our customers to see what it means to fly with ION. This is not a brochure or a picture, everybody with a laptop can see the results.”

EIB investment is an important “endorsement, like a stamp of quality that helps us in growing our business with European institutions like the European Commission, the European Space Agency and the local space agencies within the countries of the European Union,” Panesi said.

D-Orbit completed a Series A investment round in December and raised more than $10 million in a March investment round led by Italian venture capital firms. Existing investors including Seraphim Capital and Noosphere Ventures provided additional backing. The EIB endorsement is likely to help D-Orbit attract future investment, Panesi said.

D-Orbit plans to launch an updated version of the ION Satellite Carrier in December on a SpaceX Falcon 9 rideshare mission.

“We are in the final phase of testing and assembling our next satellite,” Panesi said. “It is 100% fully loaded, which means that the market is interested in this new service we are able to render.”

The ION set to launch in December also will serve as a platform for in-orbit demonstrations. Once ION releases its passenger satellites, hosted payloads will operate onboard for a period of 12 to 18 months.

While building ION, raising money and performing its first last-mile delivery service, D-Orbit has focused on laying the foundation to expand its business.

“It’s one thing to create a one-off mission and another thing to create an industrial-sized logistics service in space, which means you can accommodate several missions per year,” Ferrario said.

In 2021, D-Orbit plans to launch at least three ION missions.

In the past, Planet satellites riding as secondary payloads on large rockets have relied on drag to move them into their proper orbital positions.

“It’s been great working with D-Orbit on this mission,” Mike Safyan, Planet vice president of launch and regulatory affairs, said in a statement. “We’ve been very pleased with the performance of the ION and look forward to future launches together.”