Two satellites from the Defense Advanced Research Projects Agency that were part of a SpaceX rideshare mission were damaged Jan. 4 at the payload processing facility.
SpaceNews 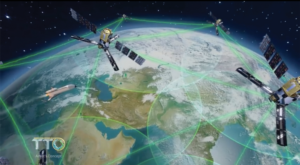 WASHINGTON — Two satellites from the Defense Advanced Research Projects Agency that were part of an upcoming SpaceX rideshare mission have been damaged at the payload processing facility, the agency confirmed Jan. 6.

The mishap happened on Jan. 4 at SpaceX’s launch processing facility at Cape Canaveral, Florida. DARPA’s satellites were scheduled to fly to orbit on a Falcon 9 rocket as part of the Transporter-1 mission, SpaceX’s first dedicated rideshare mission scheduled to launch Jan. 14.

The Transporter-1 rideshare flight will take dozens of small satellites to a sun-synchronous orbit for commercial and government customers.

The satellites are part of the Blackjack program, an effort led by DARPA and the Air Force Research Laboratory to deploy a constellation of small satellites in low-Earth orbit.

DARPA Program Manager Stephen Forbes said Jan. 6 in a statement to SpaceNews that the satellites sustained damaged and the agency is evaluating the next steps.

“DARPA and its government partners are currently working with launch provider SpaceX to execute their root cause, corrective action process and assess damage to the satellites,” Forbes said.

The two satellites are experiments known as Mandrake 1 and Mandrake 2 which DARPA describes as “risk reduction” flights to prove advanced technologies such as satellite constellation autonomy and optical inter-satellite links in advance of the actual deployment of Blackjack satellites.

According to an industry source the mishap happened while the satellites were being stacked and the payload separation system was accidentally released. SpaceX did not respond to questions on what caused the mishap.