Dawn Aerospace announced Dec. 9 that it received approval from the New Zealand Civil Aviation Authority (CAA) to begin flying the Mk-II Aurora, a 4.8-meter-long test vehicle the company developed as part of a long-term campaign to develop a reusable spaceplane.
SpaceNews 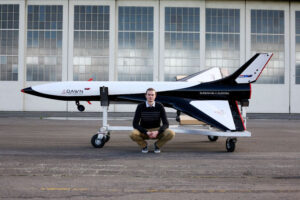 SAN FRANCISCO – Dawn Aerospace announced Dec. 9 that it received approval from the New Zealand Civil Aviation Authority (CAA) to begin flying the Dawn Mk-II Aurora, a 4.8-meter-long test vehicle the company developed as part of its campaign to develop a spaceplane to conduct multiple daily flights from conventional airports.

“The challenge of getting to space is equal parts the vehicle, the launch infrastructure and the regulation,” Stefan Powell, Dawn Aerospace co-founder and chief technology officer, said in a statement. “We have made great strides in revolutionizing the hardware. Today is a significant step towards the rest; showing we can fly from one of the thousands of civilian airports around the world, and do so without kicking other aircraft out of their airspace.”

Dawn Aerospace worked closely with CAA over 18 months to establish flight procedures and systems that would allow the Dawn Mk-II Aurora to operate alongside conventional aircraft. The New Zealand Space Agency (NZSA) played a key role in ensuring that the CAA certification could be combined with a high-altitude vehicle license, clearing the way for Dawn Aerospace to eventually perform suborbital flights, according to the news release.

“CAA and the NZSA are showing that innovative and future-proof regulation is a reality in New Zealand,” James Powell, Dawn Aerospace general manager and head of certification, said in a statement. “It was not easy, but it was the product of the tireless efforts of the CAA and NZSA to keep New Zealand at the leading edge of aerospace innovation. We couldn’t do this anywhere else in the world.”

Dawn Mk-II Aurora flights are scheduled to begin in 2021 from an airport on New Zealand’s the South Island.

Prior to developing the spaceplane, Dawn Aerospace developed thrusters that use nitrous oxide and propene instead of the more common hydrazine.