Indonesia’s government has secured financing to continue manufacturing the SATRIA broadband satellite, although its intended orbital slot remains up in the air.
SpaceNews 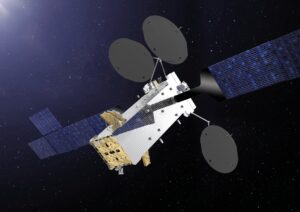 TAMPA, Fla. — Indonesia’s government has secured financing to continue manufacturing the SATRIA broadband satellite, although its intended orbital slot remains up in the air.

Bielecki said the program can continue uninterrupted now the project has secured about $545 million in funding, partly backed by France’s Bpifrance export-credit agency. It has been operating in “full swing” since September “with already many design milestones achieved,” a company official added.

About $431 million of SATRIA’s funding package is debt, with the rest financed through equity.

The financing documents were completed during a virtual ceremony held Feb. 26 in the Presidential Palace of Indonesia, attended by the country’s President Joko Widodo.

Beaming more than 150 gigabits per second over the entire Indonesian territory, SATRIA aims to narrow the digital divide by connecting around 90,000 schools and 40,000 hospitals and public buildings. It will also link regional government sites that are currently outside of satellite and terrestrial networks.

Thales Alenia Space announced in July 2019 that it had been selected as prime contractor for SATRIA but delays in financing the project meant a preliminary work agreement came more than a year later on Sep. 3, 2020.

The delay reportedly helped put SATRIA on course to miss a regulatory deadline to start services from its 146°E orbital slot by March 2022.

The country’s government is also considering plans to keep the slot by moving another spacecraft to 146°E in the meantime, or use another orbital filing entirely, the newspaper added, citing a government press briefing. At the time, the newspaper said the government was forecasting a delay to launch SATRIA from March 2023 to the fourth quarter of that year.

SpaceX has been lined up for SATRIA’s launch, which Thales Alenia Space told SpaceNews “is planned for the first semester of 2023”.

PSN was unable to comment before this report was published.