The Space Force is by far the smallest branch of the U.S. military and will have to “punch above its weight,” said Lt. Gen. B. Chance Saltzman, deputy chief of space operations.
SpaceNews 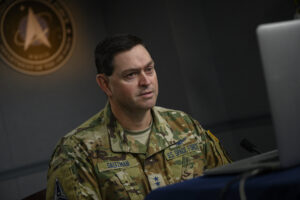 WASHINGTON — The Space Force is by far the smallest branch of the U.S. military and will have to “punch above its weight” to get its share of military funding and other resources, said Lt. Gen. B. Chance Saltzman, deputy chief of space operations.

The Space Force was carved out of the former Air Force Space Command so it has people with lots of experience operating satellites and launching rockets. But as an independent military service, it now has to become proficient in the bureaucratic processes that all the services have to navigate in order to get funding and support for their initiatives.

“We’ve been doing space operations for years under the Air Force. But as a service we now have to advocate for new resources,” Saltzman said Feb. 9 at the Blue Marble Strategic Space conference.

Saltzman is deputy chief of space operations for operations, cyber and nuclear. He described his role as the “chief operating officer of the Space Force.”

With about 16,000 people in its ranks — half military and half civilians — the Space Force is less than one-tenth the size of the Marine Corps. “We’ll always be the smallest,” said Saltzman, but the Space Force will still have to make sure its budget proposals and other matters related to space are heard in the Pentagon.

“We have to stand up to service level responsibilities, to build our budget” and advocate for space initiatives, said Saltzman. That takes a lot of bureaucratic input and coordination, he said.

The chief of the Space Force Gen. John Raymond is a member of Joint Chiefs of Staff, the body of the most senior uniformed leaders that advises the defense secretary and the president of the United States. “That takes a lot of preparation and staff work to make sure General Raymond is advised from a Space Force standpoint on any issue that’s going to go before General Milley,” said Saltzman. Gen. Mark Milley is the chairman of the Joint Chiefs.

Establishing its role in the DoD bureaucracy

In its second year of existence, the Space Force has to begin establishing its role in the defense bureaucracy and figure out how to work with the other services that also have space assets and capabilities, Saltzman explained. “Some of this is about our young space staff integrating into the Department of Defense for the normal policy guidance and budget requirements development process. That’s one of the big integration efforts.”

As a new service, the Space Force also will have to built relationships with the military combatant commands that conduct operations around the world. “Most of our equipment and squadrons are assigned to U.S. Space Command,” Saltzman said. But the Space Force also has to work with the other commands. “We are a force provider for all combatant commands,” he said. That requires standing up teams of people responsible to “integrate space” into operations and “normalize the processes so the rest of DoD knows how the Space Force will bring capacity to bear.”

Raymond earlier this month traveled to Ramstein Air Force Base, Germany, where U.S. European Command and NATO space forces conduct operations. Raymond was there to explain the role of space in global operations. “This is part of our integration effort,” Raymond told reporters Feb. 3. “The first year we built the Space Force.  This year we are focused on integrating that force.”