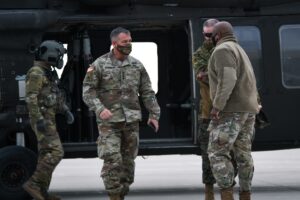 WASHINGTON — The commander of U.S. Space Command warns in a new document that keeping satellites safe from hostile attack will require a coordinated response involving all elements of the U.S. military and allies.

The U.S. military operates as a “joint force” and space is now part of that mix, said Gen. James Dickinson, commander of U.S. Space Command.

Dickinson on Thursday released a “commander’s strategic vision” document that calls on Space Command to prepare for “an increasingly complex environment” that is “far more competitive and dangerous today than ever before.”

The strategic vision document lays out broad goals for Space Command, an 18-month-old organization that is working to define its place in the structure of military operational commands.

Space Command’s forces are trained to protect critical satellites that are used in every aspect of military operations. Defending the high frontier is a complex endeavor that requires cooperation across military commands and civilian agencies, Dickinson said in an interview with SpaceNews.

Space Command has to work closely with forces that operate on land, at sea, in the air and in cyberspace, said Dickinson. The command also plans to strengthen relationships with allies that, like the United States, want to ensure they have access to space for military and civilian purposes.

In the commander’s vision document, Dickinson said Space Command troops will need to educate themselves on what other countries and potential adversaries are doing in space, and become proficient in the use of advanced technology. The command will build closer ties with other government agencies that are involved in space activities, and with the commercial industry, he said. All parties should work together to “promote responsible behavior in space.”

‘Never a day without space’

Space Command is one of 11 unified U.S. military combatant commands. It was first established in 1985 and deactivated in 2002 when space operations were moved under U.S. Strategic Command. The Trump administration reactivated in August 2019.

Dickinson’s main message is that Space Command must make sure “there is never a day without space.” The military’s reliance on satellites — and their importance for the daily functioning of the global economy — is why the command exists, he said. But Space Command can’t do this alone and needs support from all “elements of national power.”

In an earlier era, Space Command’s main focus was to support other military organizations supplying satellite-based services like communications, weather, missile warning and navigation. But now those overhead assets that provide those services are under threat. Dickinson explained that Space Command would be called upon to “fight and win in the space domain” in the event of an attack.

If satellites were targeted, the response would be led by Space Command but would require support from the other combatant commands with air, cyber, ground and naval assets, said Dickinson. That is a key point that many still don’t understand, he said, “the difference between the old and the new Space Command. We are now a supported warfighter command.”

As a unified combatant command, Space Command brings in forces from all branches of the armed services. The newest military service, the U.S. Space Force, was created to train and equip forces that  are assigned to Space Command. Dickinson insisted that the integration of space with the other domains is what creates a powerful deterrent for any adversary contemplating the use of electronic weapons or missiles to take down U.S. satellites.

Dickinson is the first Army officer to lead U.S. Space Command, which is temporarily headquartered at Peterson Air Force Base, Colorado. His deputy is a Space Force officer, Lt. Gen. John Shaw. Until now, all previous space commanders were Air Force generals.

The future location of U.S. Space Command is now at the center of a political fight following the Trump administration’s decision to relocate it to the Army Redstone Arsenal in Huntsville, Alabama.