SDA and DARPA small spacecraft equipped with optical crosslinks will fly to orbit in SpaceX’s next rideshare mission Transporter-2.
SpaceNews 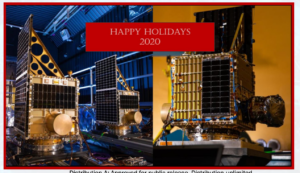 WASHINGTON — The Pentagon’s space agency this year will launch a series of experiments — including satellites with laser links and missile-tracking sensors — as is prepares to begin deploying a network of satellites in low-Earth orbit in 2022.

One of those experiments is Mandrake 2 — a pair of small spacecraft equipped with optical crosslinks that was scheduled to launch Jan. 24 on SpaceX’s massive rideshare Transporter-1. The satellites were accidentally damaged during payload processing and didn’t make the launch. They are now being repaired and will fly to orbit this summer on SpaceX’s next rideshare mission Transporter-2, said Derek Tournear, director of the Defense Department’s Space Development Agency.

Mandrake 2 is a joint project by the Defense Advanced Research Projects Agency, the Air Force Research Laboratory and the Space Development Agency. The agencies were so excited about the January launch that they made a holiday card with pictures of the satellites, Tournear said on a pre-recorded presentation aired Feb. 11 at the SmallSat Symposium.

The satellites were made in just nine months by Astro Digital with optical links from SA Photonics. They are part of DARPA’s Blackjack program that seeks to demonstrate technologies on low orbiting satellites for military applications. Tournear said the Blackjack program is going to test technologies that the Space Development Agency (SDA) will be able to apply to its future fleet of satellites in low-Earth orbit.

SDA plans to launch 30 satellites in 2022 — 20 for a Transport Layer of data-relay satellites, eight for a missile-warning Tracking Layer and two sensor satellites from the Missile Defense Agency. It projects to buy up to 150 additional satellites to be launched in 2024 to expand coverage.

Testing the performance of optical crosslinks is a top priority for SDA and DARPA. Any future military network has to be able to pass huge amounts of data from satellite to satellite, from space to the ground and from space to aircraft in flight.

Also expected to ride to space on Transporter-2 is an SDA optical crosslink demonstration with two satellites made by General Atomics, Tournear said.

The Air Force Research Laboratory is working with ViaSat on a Link 16 satellite. The idea is to deploy a Link 16 terminal on a small satellite in low Earth orbit as a network relay. Tournear said this an important demonstration of “what you can go from space” with a tactical data link network. SDA is the lab’s “transition partner,” meaning that it will procure more satellites if the experiment is successful. Tournear said Link 16 should launch later this year.

The SDA and the Missile Defense Agency are also planning to launch a Prototype Infrared Payload made by Northrop Grumman as a medium field of view multispectral sensor. This experiment will give SDA and MDA valuable data to develop models for its missile-tracking sensors. This demonstration also is significant for SDA as it tries to get funding for 40 missile-tracking satellites to supplement the eight it’s already acquired.

The SDA’s sense of urgency to stay on schedule and get technology on orbit is one of Tournear’s frequent talking points.

At the SmallSat Symposium he said SDA operates “almost as a commercial entity within the Defense Department.” The satellites that the military will use to track targets and move data around the world are products that SDA wants to make sure are delivered as promised.

SDA, established in March 2019, wants to show it can bring the so-called proliferated low-Earth orbit space technology from the commercial industry to the military at a pace and at prices that would have been inconceivable even a few years ago.

“When this whole concept of proliferation was first pitched within the Pentagon, people went back and looked at their historical models and said: ‘You’re looking at hundreds of millions of dollars per satellite,’” said Tournear. “So if you want to proliferate hundreds to thousands of these satellites, there’s just no way that’s affordable.”

Tournear said he persuaded the Pentagon leadership that SDA could get satellites under $20 million apiece. Prices in fact are getting lower than that, he said. The contracts awarded last year for Transport Layer satellites were priced at just over $14 million each. “So it really shows that, yes, in fact, this is believable. This can be done at an affordable cost.”

To broaden its reach and access to skilled workforce, the SDA is opening up locations outside the Pentagon.

Tournear said there are now SDA field offices at Los Angeles Air Force Base where the Space Force’s Space and Missile Systems Center is located; at Schriever Air Force Base in Colorado near U.S. Space Command; at Cape Canaveral, Florida; and in Huntsville, Alabama, where the Missile Defense Agency has a large presence. A future location is planned at Grand Forks Air Force Base, North Dakota.

“We have distributed operations to make sure that we can access the talent where we need it and that we can we can get to the missions in those locations,” said Tournear.