The lunar lander under development by Dynetics for NASA’s Artemis program will make use of in-space refueling of cryogenic propellants and require three launches in quick succession, company officials revealed.
SpaceNews 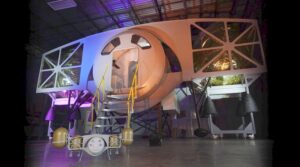 WASHINGTON — The lunar lander under development by Dynetics for NASA’s Artemis program will make use of in-space refueling of cryogenic propellants and require three launches in quick succession, company officials revealed.

In a Sept. 15 webinar held by Dynetics in cooperation with the American Institute for Aeronautics and Astronautics, the company discussed the overall architecture for the lander it is developing as part of NASA’s Human Landing System (HLS) program. Dynetics is one of three companies that received HLS contracts from NASA in April for initial design studies of a lander that can transport astronauts to and from the lunar surface.

The Dynetics lander relies on in-space refueling to be able to carry out its mission. “Our lander is unique in that we need lunar fueling to accomplish our mission,” said Kathy Laurini, the HLS payload and commercialization lead at Dynetics, during the webinar. “In the next couple years, we will take in-space cryogenic propellant refueling technologies from the lab to TRL 10 and operational.” TRL, or technology readiness level, is a measure the maturity of a technology, and is usually measured on a scale of one to nine.

That refueling will initially be done by additional launches carrying propellant that is transferred to the lander. The lander will be launched on a United Launch Alliance Vulcan Centaur rocket. For the initial 2024 landing mission, Laurini said that launch will be followed by two additional Vulcan launches. Propellant from those rockets’ Centaur upper stages will be transferred to the lander.

One challenge with this approach is with “boiloff,” or loss of cryogenic propellants as they warm up. To address this, Dynetics plans to carry out the Vulcan Centaur launches on “14 to 20 day centers,” or roughly two to three weeks apart, said Kim Doering, vice president of space systems at Dynetics. “We worked closely with NASA on our concept of operations, and the Orion plans, to ensure that our operational scenario is viable and feasible.”

That would be a much faster launch rate than what ULA’s existing vehicles, the Atlas 5 and Delta 4, have traditionally supported. “We’re all set up and preparing the launch system to support that cadence out of the Cape, and on track to do that,” said Mark Peller, ULA vice president, during the webinar.

In the long term, propellant for the Dynetics lander could come from other sources. Laurini said the lander could be a customer for future commercial propellant depots around the moon, or use propellant created from extracting water ice on the lunar surface. “Having the ability to fill our liquid oxygen tanks on the lunar surface could enable new mission classes,” she said, “like hopping around to other parts of the moon to accomplish some key science objectives.”

Dynetics also used the webinar to show a full-scale model of the lander it recently completed. The low-fidelity lander is primarily intended to allow astronauts and engineers to test the layout of the lander’s cabin, including placement of key systems, to determine the best locations for that equipment.

In addition to the mockup, Dynetics said it has completed both a systems requirements review and a certification baseline review for the lander. Those were among the early milestones in its $253 million HLS contract from NASA.

Blue Origin separately announced Sept. 14 it completed similar reviews of the lunar lander it is developing under a $579 million HLS award, agreeing with NASA on dozens of design and construction standards. Blue Origin is leading a so-called “National Team” that includes Draper, Lockheed Martin and Northrop Grumman. It recently delivered a full-sized mockup of its lander to NASA’s Johnson Space Center for testing like that planned for the Dynetics model.

The third company to win an HLS award, SpaceX, has provided few updates about the progress it is making on its $135 million contract to design a version of its Starship reusable launch vehicle for lunar missions. The company did not respond to questions about the status of reviews and the development of mockups or other hardware associated with the program.