As launch activity grows on the Eastern Range in Florida, companies and government agencies are looking at ways to add capacity, largely through incremental improvements.
SpaceNews 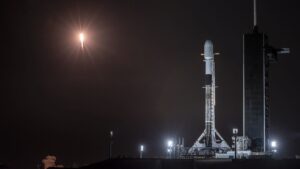 WASHINGTON — As launch activity grows on the Eastern Range in Florida, companies and government agencies are looking at ways to add capacity, largely through incremental improvements.

In a panel discussion at the 47th Spaceport Summit Feb. 23, Brig. Gen. Stephen G. Purdy Jr., commander of the 45th Space Wing and director of the Eastern Range, said the range supported 32 launches in the last 12 months. Those launches came from 55 launch attempts that “went to countdown.”

However, there were 297 requested launch opportunities over that period, of which the range approved 225. “Each one of those are obviously a lot of work and a lot of coordination with a lot of partners,” he said. “There’s a lot of work that goes on just get those launch dates, and that’s going to keep increasing as we get to those expected launch rates in the future.”

Those expected launch rates he referred to came from a study by The Aerospace Corporation that projected a surge in commercial launch activity from Cape Canaveral Space Force Station and neighboring Kennedy Space Center in the next few years. “We’re getting up to over 60 launches a year,” said Bob Cabana, director of KSC.

One innovation is the adoption of autonomous flight safety systems on launch vehicles that eliminate the need for tracking and communications system that can take days to reconfigure from one launch attempt to the next. “We were able to go from locking down the range for 72 to 96 hours to being able to support multiple launches in a single day,” said Wayne Monteith, associate administrator for commercial space transportation at the Federal Aviation Administration and a former commander of the 45th Space Wing.

SpaceX uses autonomous flight safety systems for its Falcon 9 launches, which has allowed it to closely schedule launches. The company has, on two occasions, attempted two Falcon 9 launches from Space Launch Complex 40 and Launch Complex 39A on the same day, but weather or technical issues with the rocket prevented both launches from taking place.

“We came very close” to two launches in one day, said Hans Koenigsmann, senior adviser for build and flight reliability at SpaceX, including an attempt in February where two launches were scheduled for less than four and a half hours apart. “This will happen in the near future, that we launch two vehicles from two pads on the same day. It will only increase from there.”

Purdy said the range has set an October 2025 deadline for other vehicle operators to adopt autonomous flight safety systems. That transition will free up an “not insignificant amount of personnel and equipment” currently used for tracking launches.

Other changes are more incremental. Both the Eastern Range and launch companies are studying weather requirements, looking for minor changes that decrease the probability that conditions such as lightning scrub a launch.

“We’ve got multiple projects underway to keep nibbling away at the weather question,” said Purdy, such as reducing the radius around a launch site for lightning from five miles to four miles.

“We’re investing on the technical infrastructure to make the rocket more robust against lightning,” said Scott Henderson, vice president of test and flight operations and Florida site director for Blue Origin. “The idea is that you can launch a rocket any time an airplane is taking off from Orlando’s airport.”

More complex launches, though, are introducing more weather constraints. Koenigsmann said many SpaceX launches have instantaneous launch windows, with no margin for error in the event of bad weather. Crewed launches also require good weather along the trajectory to orbit in the event of an abort, and most SpaceX launches involve a booster landing at sea where weather can be an issue.

Purdy said his weather team is working with SpaceX and others planning ocean landings to better understand weather conditions at sea. That’s included incorporating climatology data along the Eastern Seaboard to see what areas are more likely to have favorable wind and sea state conditions for a landing.

Other tweaks involve procedures. Purdy said each of the 297 requests for a launch date the range received in the last year took “multiple hours” to process. “The range adjudication process is one of our biggest pain points right now,” he said. “An automation process in that people-centric approach is something we’re trying to work cooperatively with the FAA and our other mission partners on.”

The FAA’s commercial space transportation office has taken steps to support higher launch rates through more streamlined regulations, released last fall and scheduled to formally go into effect later this month. That’s needed, Monteith said, because the number of licensed launches is growing far faster than the number of people in his office. “If we don’t plan ahead and adapt, we will become the limiting factor to the growth and success of the U.S. commercial space industry,” he said.

Orbital launches on the Eastern Range are today performed primarily by two companies, SpaceX and United Launch Alliance. Several more companies, though, are either building new launch facilities or have announced plans to launch from Cape Canaveral, including Blue Origin, Firefly Aerospace and Relativity. That will make launch coordination more complicated.

“As we add more launch providers, that’s going to be more dynamic,” he said. “We’re going to have to figure out a way to do that.”

Koenigsmann was not concerned. “I just don’t see anybody else doing that level of launches right now” compared to SpaceX, he said, expressing optimism that SpaceX and others can find solutions to any future scheduling issues. “After all, we land on ships, right? How hard can that be.”