A Falcon 9 first stage failed to land after a launch last month because one of its engines shut down during flight after hot gas breached a worn-out cover.
SpaceNews 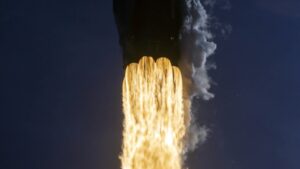 WASHINGTON — A Falcon 9 first stage failed to land after a launch last month because one of its engines shut down during flight after hot gas breached a worn-out cover.

During a NASA press conference March 1 about the upcoming Crew-2 commercial crew flight, Benji Reed, senior director for human spaceflight programs at SpaceX, said that while the booster used on that Feb. 15 launch was making its sixth flight, some components on it were “life leaders” that had flown more often than any other in the Falcon 9 fleet.

That included “boots,” or covers around parts of the Merlin engines in the first stage. “This was the highest count number of flights that this particular boot design had seen,” he said.

However, one of those boots had a “little bit of a hole” that allowed hot gas to get into parts of the engine during flight, he said. “A little bit of hot gas got to where it’s not supposed to be, and it caused that engine to shut down,” he said.

Reed didn’t mention at what point in the launch the engine shut down, but he suggested it took place during ascent. “A great thing about Falcon 9 is that we have engine-out capability,” he said, meaning that one of the first stage’s nine engines can shut down without jeopardizing the mission. “The vehicle got to orbit and put the satellites exactly where they want to be. The primary mission was accomplished.”

The shutdown of the engine, though, kept the first stage from landing. “When that booster came to return home, because of the problem with that particular engine, we didn’t have enough thrust to get back to where we needed to be, and didn’t land where we wanted to be,” he said.

Reed’s comments offered the most details to date on why the booster failed to land, breaking a streak of two dozen consecutive landings dating back nearly a year. Hans Koenigsmann, a longtime SpaceX executive who is currently a senior adviser for build and flight reliability at the company, said Feb. 23 that “heat damage” was to blame, but didn’t go into more details.

The Falcon 9 has not launched since that Feb. 15 mission, although the company attempted a launch Feb. 28 of another set of Starlink satellites. The launch was scrubbed 84 seconds before the scheduled 8:37 p.m. Eastern liftoff, and the company has not set a new date for the launch or provided more information about the cause of the scrub.

During the webcast of that launch attempt, the SpaceX hosts did not discuss the failed landing. However, they noted that there would be no video from the first stage on that launch, a break with the company’s standard practices.

Reed said the engine problem was “a great lesson that we learned” as the company works to better understand the lifetime of Falcon 9 boosters and which components are most susceptible to wear and tear. The company is also working to upgrade control systems on the vehicle “to even further detect and control what the vehicle needs to do” in circumstances like that.

NASA has been following the investigation to understand if there are any problems that may pose safety issues to the Falcon 9 that will launch the Crew-2 mission, currently scheduled for no earlier than April 20. “We will follow along with SpaceX’s investigation,” Steve Stich, manager of NASA’s commercial crew program, said at the briefing, including making sure they understand the problem before giving approval to launch the mission.

A big difference between the Starlink missions and Crew-2 is the number of flights. “We’re about to embark on our first reuse here for a crewed vehicle,” he said. The Falcon 9 booster that will launch Crew-2 previously launched the Crew-1 mission in November 2020, but with no flights in between. “SpaceX Starlink flights are pretty far out there” in terms of number of reuses of the boosters, he noted.

The astronauts who will fly on Crew-2 have also been keeping track of this and potentially other Falcon 9 issues. “We’ve been briefed about every month on the updates of our spacecraft as well as the rocket, so we’re very confident that they’re going to figure out what’s going wrong.” said Shane Kimbrough, the NASA astronaut who will command Crew-2. “It’s just been a few little things on a few of these rockets.” He didn’t elaborate on what those “few little things” are.