The European Space Agency has awarded contracts for work on elements of its moon and Mars exploration program, ranging from modules for the lunar Gateway to a mission to return Mars samples to Earth.
SpaceNews 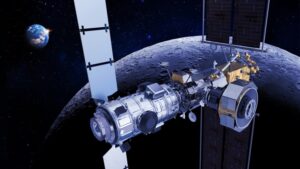 WASHINGTON — The European Space Agency has awarded contracts for work on elements of its moon and Mars exploration program, ranging from modules for the lunar Gateway to a mission to return Mars samples to Earth.

ESA’s announcement of the contracts was tied to an Oct. 14 session of the International Astronautical Congress (IAC), where ESA and European companies discussed their partnership with NASA on both the Artemis lunar exploration program and the Mars Sample Return series of missions.

The projects are funded by the contributions that ESA’s member states provided to exploration programs at the Space19+ ministerial meeting last November. “This gives us new possibilities to go to low Earth orbit, the moon and Mars, and to do it together,” ESA Director General Jan Woerner said at the IAC.

Among the contracts announced were two to Thales Alenia Space for elements of the NASA-led lunar Gateway. Thales Alenia’s Italian business is the prime contractor for the I-Hab, an international habitation module, while its French business will be the prime contractor for the European System Providing Refueling, Infrastructure and Telecommunications (ESPRIT), a refueling and communications module. The I-Hab contract is worth 327 million euros ($383 million). Work has started on ESPRIT under an authorization-to-proceed notice from ESA, with the contract to be finalized by the end of the year.

Thales plans to leverage its experience building modules for the International Space Station and for Northrop Grumman’s Cygnus cargo spacecraft for the Gateway, but with some modifications. “The lunar environment is different from low Earth orbit,” he said, requiring improved micrometeoroid shielding and radiation protection. There will also be greater emphasis on autonomous and remote operations, since unlike the ISS, the Gateway will have crews on board only occasionally.

I-Hab is scheduled for launch in 2026. ESPRIT consists of two elements, which will launch separately. Its telecommunications element will be installed on Northrop Grumman’s Habitation and Logistics Outpost module, which will launch with the Power and Propulsion Element in 2023. The refueling element, which also includes a pressurized module with large windows, is scheduled to launch by 2027.

Airbus Defence and Space received an ESA contract to build the Earth Return Orbiter, the last of three missions in the overall NASA-ESA Mars Sample Return program. The orbiter, launching in 2026, will go into orbit around Mars and collect a sample canister launched into orbit by a NASA-developed lander also launching in 2026. The orbiter will then return the samples to Earth, arriving in 2031.

The contract for the orbiter is valued at 491 million euros. Airbus also has study contracts from ESA for a “fetch rover” that will fly on the NASA lander mission, collecting samples cached by NASA’s Mars Perseverance rover launched in July and returning them to the lander. The company is under contract from ESA for the service modules for the first three Orion spacecraft, with negotiations in process on a contract for the next three.

“It’s a great day for Airbus. We are extremely proud ESA has entrusted Airbus with the most vital aspect of space exploration for the next decade,” said Jean-Marc Nasr, head of Airbus Space Systems, in a press conference after the IAC session.

Both Airbus and Thales Alenia received contracts from ESA for initial studies of the European Large Logistic Lander (EL3), a robotic lander that will be capable of carrying up to 1.5 metric tons to the lunar surface. ESA envisions using the lander starting in the late 2020s for delivering cargo to support future human missions as well as for science missions, including lunar sample return.

David Parker, director of human and robotic exploration at ESA, said in an interview that the study contracts will lead to the selection of one of the companies to proceed with development of EL3, assuming funding for the program is allocated by ESA’s member states at the next ministerial meeting in 2022. A call for ideas this summer for potential applications of EL3 led to 300 proposals, which he said are being used to develop “model missions” to support those studies.

ESA has now signed contracts for various elements of its overall exploration program worth 1.3 billion euros, Parker said, which will grow to 2.9 billion euros by the end of next year. Part of the contracting process involves balancing funding contributed by the member states to the exploration program to specific areas of interest. He noted Germany was particularly interested in lunar robotic missions, while France and Italy had a greater interest in the lunar Gateway and Mars Sample Return.

Besides building various spacecraft, ESA’s member states anticipate its investment will give it an opportunity to fly ESA astronauts on Artemis missions to the moon. “We obviously have the ambition to get European astronauts to the surface to moon,” he said. Those projects as well as future contributions, like developing a satellite system to provide lunar communications and navigation, could enable ESA to assign an astronaut to a later Artemis mission.

NASA Administrator Jim Bridenstine, who appeared at the IAC session with Woerner, acknowledged that NASA was relying on ESA for carrying out the Artemis program. “That mission, on day one, is going to be international and it will include the European Space Agency as not just a critical partner but a critical enabler,” he said.