The European Space Agency’s Clean Space initiative is assisting in the development of satellite components that are designed for demise, an approach to satellite development that advocates for the safe disposal of spacecraft by destructive atmospheric reentry.
SpaceNews 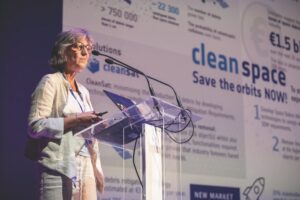 VALETTA, Malta —  Through a novel approach to testing, the European Space Agency’s Clean Space initiative is assisting in the development of satellite components that are designed for demise, an approach to satellite development that advocates for the safe disposal of spacecraft by destructive atmospheric reentry.

The ESA Clean Space initiative was launched in 2012 to consider the environmental impact of the agency’s missions across their entire life cycle. A primary focus of Clean Space since its earliest days has been mitigating space debris through “design for demise.” The goal: making design choices that ensure a spacecraft component has less than a 1 in 10,000 chance of surviving reentry and posing a threat to people on the ground.

When considering how to design components that are more likely to burn up in the atmosphere during reentry, the Clean Space team took a novel approach. Instead of relying on modeling software to understand the forces exerted on a specific component during a satellite’s reentry, the team followed their models up with real-world testing.

In order to simulate what a satellite and its components would experience during reentry, the team utilized a plasma wind tunnel at German space agency DLR’s facility in Cologne. The wind tunnel is able to mimic the superheated gas, or plasma, that satellites encounter during reentry, subjecting individual components and sections of satellites to several thousands of degrees Celsius.

Following a series of initial studies to identify which components of a satellite were most likely to survive reentry, the ESA Clean Space team began initial plasma wind tunnel testing in 2015. These initial tests were completed on a selection of materials utilized in satellite construction including aluminum titanium alloy and stainless steel.

The first test on a component of a satellite was conducted in 2018. During this test campaign, the team put a reaction wheel, which is used to enable three-axis attitude control, through a simulated reentry. In addition to individual satellite components, the 2018 test campaign also put a complete cubesat through its paces.

The latest Clean Space yearlong design-for-demise test campaign was completed in March. This was the most ambitious set of testing yet with the team putting a broad selection of components through simulated re-entries including an onboard computer, a battery module, and a magnetorquer.

A magnetorquer is a widely used satellite actuator that interacts with Earth’s magnetic field to create torque that can be used for attitude control and stabilization. LusoSpace’s magnetorquer consists of a carbon fiber reinforced polymer composite shell that houses an iron-cobalt core wrapped with copper coils. The Clean Space team had expected the carbon fiber shell to melt first, followed by the copper coils, and then the core. This, however, was not the case.

Instead of merely melting off, the carbon fiber shell remained largely intact before peeling away from the component’s internals. The copper coils then melted as expected, leaving the core and one last surprise.

The team discovered that the core had a higher than expected energy emissivity, meaning the iron-cobalt material was emitting most of the energy it was receiving. This caused it to take far longer to melt than expected. In fact, the ceramic mounts that were being used to fix the magnetorquer in place began to melt while the core remained largely intact.

The insight garnered from the test and others like it revealed that in order to ensure a satellite’s magnetorquer burns up safely, it was necessary to expose the core as early in the reentry phase as possible. With this insight in mind, LusoSpace made some changes to a next-generation magnetorquer that had been under development following a preliminary Clean Space study completed in 2015.

According to LusoSpace representative André Rodrigues Santos, the new design features a revised shape that exposes a portion of the core. The result is a magnetorquer that is expected to burn up completely when it separates from a spacecraft structure at an altitude of at least 78 kilometers. Previous models of magnetorquers would only have had a 60% chance of burning up when released at such altitudes.

The new magnetorquer is expected to reach the Technology Readiness Level 6 phase of its development in 2021, which is mature enough for LusoSpace to begin offering the product to satellite manufacturers. According to Santos, the company is currently in the bidding phase for a number of projects.

With the success of the initial design, LusoSpace was awarded an ESA contract in early 2019 to qualify a larger magnetorquer and produce a new line of the components. The contract was awarded under the agency’s Generic Support Technology Program with a small contribution from ESA’s Earth Observation Program, a future potential customer for this kind of demisable hardware.

According to Soares, the magnetorquer has been a pioneer for the Clean Space team’s design-for-demise efforts. It is, however, one of many under development thanks to the ESA initiative. The Clean Space team has been involved in the development of propellant tanks, reaction wheels and battery modules designed for demise, several of which are also approaching maturity.

On top of the satellite components already under development, the Clean Space team expects to return to the plasma wind tunnel to perform a new batch of reentry simulations. This new test campaign will include solar array drive mechanisms and monopropellant tanks. It will also see the introduction of an updated test stand that will enable the team to rotate parts to mimic the tumbling experienced by a satellite during reentry.