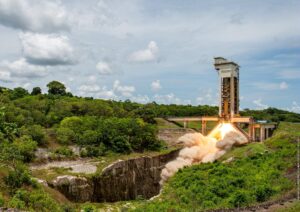 Developed by an ArianeGroup and Avio joint venture called Europropulsion, the P120C is a multipurpose solid rocket booster designed to be used as the first stage of the light-lift Vega C and as strap-on boosters for the heavy-lift Ariane 6. Both Vega C and Ariane 6 are expected to launch for the first time in 2021.

The Ariane 6 P120C qualification model was fired on a test stand at Europe’s Guiana Space Centre in Kourou, French Guiana. The booster was fired for 130 seconds, producing over a million pounds of thrust.

The Ariane 6 is expected to attempt its maiden launch in the second half of 2021. Equipped with two side-mounted P120C boosters, the Ariane 6 will be able to carry more than 5 tons to geostationary transfer orbit. The launcher’s A64 configuration, with four P120C boosters strapped to the core stage, will be able to lift more than 11 metric tons to the same popular drop-off point for geostationary satellites.

The Vega C, which will use a single P120C as its main stage, is currently expected to debut in mid-202. Avio CEO Giulio Ranzo said last month the additional slip was necessary to prioritize customers still waiting for launches aboard the current Vega rocket, which was grounded following a July 2019 failure. Vega successfully returned to fight Sept. 2 carrying 53 tiny satellites and is scheduled to launch again in mid-November on its final mission of 2020. Avio had hoped to conduct three Vega launches in 2020 and still possibly squeeze in Vega C’s debut before 2021.

The P120C is a product of European industry with contractors from across the continent contributing to its development. The booster’s carbon-fibre composite motor case is developed by Avio in Italy. ArianeGroup are responsible for the booster’s nozzle which can be pivoted to steer the vehicle. The igniter is supplied by Norweigan aerospace and defence company Nammo and the propellant casting is done by Regulus in French Guiana. The booster is then assembled and prepared for flight by Europropulsion.