The EGNOS GEO-4 payload, which improves the performance and accuracy of GPS and Galileo satellite navigation signals, will be hosted aboard a Eutelsat satellite slated to launch in 2022.
SpaceNews 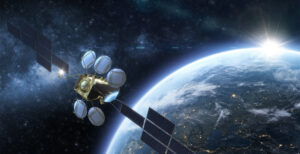 The European Geostationary Navigation Overlay Service (EGNOS) is used to improve the performance and accuracy of U.S. GPS signals. These signals can then be utilized for safety critical applications for aviation, maritime and land-based customers like railway and road management agencies.

With the Feb. 9 contract signing, the GSA has entrusted Paris-based Eutelsat with the development and operation of the agency’s next-generation EGNOS GEO-4 service. Also referred to as EGNOS Version 3, the new service will make several improvements on its predecessor including integrating signals from Galileo, Europe’s own navigation system.

The 15-year EGNOS GEO-4 contract awarded to Eutelsat is worth €100 million. An initial €15 million of the total contract award will be available to Eutelsat. The additional €85 million will be subject to funding confirmation from the European Union.

The EGNOS GEO-4 payload will be hosted aboard the Eutelsat Hotbird 13G satellite, which will be used for television broadcasting to customers in Europe, North Africa and the Middle East. The contract for the Hotbird 13G satellite was awarded to Airbus Defence and Space in 2018 with an expected launch date of 2021.

During a Feb. 9 press briefing, Eutelsat CEO Rodolphe Belmer said the launch of Hotbird 13G had been delayed to 2022. Belmer cited manufacturing delays caused by the COVID-19 pandemic for the revised launch date.

GEO-4 payload is the second EGNOS payload to be hosted aboard a Eutelsat satellite. The first, GEO-3, was launched aboard Eutelsat 5 West B in October 2019.

The EGNOS system has been operational since 2009. It is currently made up of 40 monitoring stations, two mission control centers, six navigation stations, three geostationary assets hosted aboard larger satellites, and the EGNOS Wide Area Network, which provides the communication network for all ground segments.