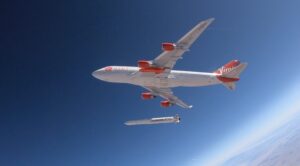 “This win allows ExoTerra to begin development of an upper stage that will deliver up to 150 kilograms of payload to the moon,” according to the news release. The upper stage also could transport 180-kilogram payloads to geostationary orbit, the release added.

“That announcement definitely has attracted the interest of many others in the growing aerospace community,” a Virgin Orbit spokesman said by email.

Virgin Orbit sees “robust demand from customers” eager to travel on LauncherOne to destinations including highly elliptical orbit, geostationary orbit “and even to the moon, Mars, Venus and the asteroid belt,” the Virgin Orbit spokesman said. “Thanks to the ingenuity of the small satellite community, many groups have found ways to do really meaningful missions at each of those destinations using the amount of mass that we can confidently deliver using a stock LauncherOne complemented by a third stage.”

“This contract win is an important milestone for ExoTerra and aligns with our goal of developing high efficiency propulsion systems to support lunar and interplanetary missions,” Michael VanWoerkom, ExoTerra president and CEO, said in a statement. “We look forward to working with NASA and the team at Virgin Orbit to create an affordable means of expanding small launch vehicles reach to [geostationary orbit], the moon and beyond.”

ExoTerra of Littleton, Colorado, declined to comment on the value of the NASA Small Business Innovation Research award.