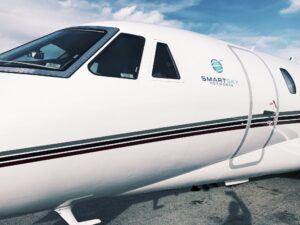 French propulsion startup Exotrail has signed two contracts with the European Space Agency for its smallsat electric propulsion technology. Under the first contract, Exotrail said it will “accelerate the qualification and flight demonstration” of its 150-Watt ExoMG-Micro thruster. The second contract calls for the 2021 delivery of a propulsion system, followed by testing at the agency’s European Space Research and Technology Centre in The Netherlands. Exotrail Chief Executive David Henri said by email that both  contracts are in the six-figure range. [Exotrail]

SmartSky Networks, a company deploying an air-to-ground network across the United States for in-flight Wi-Fi, is suing a company it had hired to provide radio equipment. SmartSky said it believes Wireless Systems Solutions misappropriated its intellectual property. SmartSky has canceled its contract with the contractor, which it also blames for failing to complete work and delaying the launch of SmartSky’s Wi-Fi service to 2021. “[W]e believe WSS attempted to sell our product as its own, including through an alter-ego company formed after we began working with WSS yet involving the same people,” SmartSky President Ryan Stone said in a news release. [SmartSky]

Satellite operator Avanti is looking for more customers for its underutilized fleet of communications satellites and hosted payloads.Avanti CEO Kyle Whitehill said that the company has cut operating costs by shedding 25% of staff since delisting from the London Stock Exchange a year ago. That and other streamlining efforts enabled the company to lower capacity prices and compete more effectively across its primary markets of Africa, Europe and the Middle East. He said that if the company can get the fill rate on its existing fleet to the “industry norm” of 70-80% it will then consider buying new small GEO satellites. [SpaceNews]

German company Mynaric said export controls will keep it from shipping a satellite laser terminal to a Chinese customer. Mynaric anticipated launching its first laser terminal aboard a Chinese spacecraft later this year, but received a notice from the German government in July that there is an export ban on such technology to China. The company informed shareholders it is considering potential compensation claims because of the ban, and is now focusing its sales efforts on the government and defense sector, particularly in the United States. Laser terminals like those Mynaric produces offer far greater bandwidth than traditional radiofrequency links. [SpaceNews]

The U.K. Space Agency is dividing more than 1 million pounds ($1.3 million) between seven firms to mature technologies for spotting and tracking space debris. Many of the projects are still in early development, though one company, D-Orbit, has cameras in orbit on a recently launched spacecraft deployer that it will attempt to use for spotting debris. UKSA considered 26 proposals for the program. The funding announcement coincides with a partnership signing between UKSA and the British Ministry of Defence to collaborate on space domain awareness. [BBC]

A former Pentagon official is the new president of in-space transportation company Momentus. Fred Kennedy joined Momentus this week after a brief stint as a vice president at small launch vehicle company Astra. Kennedy was the first director of the Pentagon’s Space Development Agency and former head of DARPA’s Tactical Technology Office. Kennedy will help Momentus accelerate its work on tugs that can move spacecraft between orbits and eventually support missions to the moon. [SpaceNews]