The FAA released Oct. 15 the final version of updated commercial launch and reentry regulations, although those in industry say the regulatory reform process is far from over.
SpaceNews 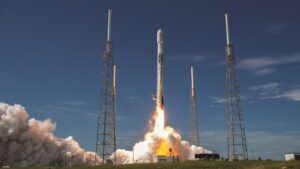 WASHINGTON — The Federal Aviation Administration released Oct. 15 the final version of updated commercial launch and reentry regulations, although those in industry say the regulatory reform process is far from over.

The final rule is the culmination of a multi-year effort by both the FAA and the commercial launch industry to update regulations dating back decades that companies argued had not kept pace with the growth of the industry and innovations like reusable vehicles. The White House instructed the FAA’s parent agency, the Department of Transportation, to update the rules in Space Policy Directive 2 in 2018, and the FAA published a draft rule in March 2019.

“The old regulations were woefully out of date and really out of step. Industry told us that loud and clear,” FAA Administrator Steve Dickson said in an online event to announce the new regulations. He cited as one example complaints by SpaceX that it took “heroics” in the regulatory process to move Falcon 9 launches between the company’s two launch pads in Florida.

One aspect of the new regulations highlighted in the event addresses that specific issue. Companies can now receive a single license that covers multiple launchers of the same vehicle from different launch sites.

The new rules, FAA officials said, are intended to allow it to better handle the growing number of launches. Wayne Monteith, the FAA associate administrator for commercial space transportation, noted that the FAA has supported three licensed launches — one each by Blue Origin, Northrop Grumman and SpaceX — since the current fiscal year began Oct. 1. “That’s the same number of launches that we supported in both fiscal year 2010 and fiscal year 2011,” he said. “We’re on tap for a record year and there’s ample reason to believe that the numbers will only continue to climb.”

The FAA also emphasized that the new rules are intended to be “performance-based” rather than prescriptive, giving launch companies the flexibility to propose alternative ways to meet safety requirements. “Instead of the FAA dictating how to reach the target, an applicant or the industry now has the ability to develop their own ways and processes to reach that,” Monteith said.

The industry embraced, somewhat cautiously, the new regulations. “We recognize the tremendous effort involved in developing and vetting updates to this complex regulation and look forward to our ongoing work with the FAA to assure a robust and safe commercial launch industry,” Mary Lynne Dittmar, president and chief executive of the Coalition for Deep Space Exploration, said in a statement.

One reason for that caution is that the industry had not had a chance to see the final rule, contained in a document 785 pages long, prior to its release. Mike French, vice president of space systems at the Aerospace Industries Association, stressed the importance of updating the regulations at the FAA event. But, he acknowledged, “I have not fully reviewed the new regulations, so we’ll be spending the coming weeks doing that deep dive.”

Audrey Powers, vice president of legal and compliance at Blue Origin and chairwoman of the Commercial Spaceflight Federation (CSF), said in an Oct. 15 interview that she, too, had not had a chance to examine in detail the new regulations. She said the CSF’s regulatory task force will be working in the near future on reviewing the regulations.

The next major milestone is a workshop the FAA plans to hold Nov. 4–6 to discuss the regulations in detail with industry. “We’ll be able to provide substantive feedback and come with educated questions about aspects of the rule,” she said.

Industry commented extensively, and at time critically, on the draft rule last year, but are only now seeing how the FAA incorporated or rejected them in the final version. “CSF advocated very publicly for a more iterative process,” she said, such as the release of a second draft for public comment. “Our fear is that there is a significant difference between the final rule and what was proposed.”

At the FAA event, Monteith acknowledged the desire by many companies for a supplemental draft rule. “We believed that, with the comments we were receiving from industry, we did not need to go with a supplement rule, and instead would put all of our energy into maximizing the performance-based nature of this rule,” he said. “I think you’re going to find that this is a better rule.”

In addition to the final rule, industry will also have to review a series of supporting documents, known as advisory circulars (ACs), where the FAA will explain how companies can meet the performance-based requirements of the rule. The FAA released three of those advisory circulars with the final rule for a 30-day comment period, with as many as 24 more to be published over the next year.

“It’s absolutely critical to have really robust advisory circular content if you want a performance-based set of rules to really be effective,” Powers said.

However, how those advisory circulars are created may be a problem. “If all they do is generate the ACs internally and spew them out for us to have 30 days to respond to, that’s the wrong model,” said Jim Muncy of PoliSpace. Both he and Powers said those circulars should be developed in a more interactive process between the FAA and industry, such as a rulemaking committee.

That collaborative approach, Powers noted, is used elsewhere in the FAA. “This is where we can learn a real lesson from the aviation side of FAA. The aviation side is very adept at developing and releasing guidance documents and circulars,” she said. “We really do hope it is more of a collaborative effort.”

There are other regulatory activities for the launch industry to tackle as well. Monteith said the Department of Transportation was working to negotiate a new memorandum of agreement with the Defense Department regarding commercial launch operations on federal ranges. “This is part of our drive to eliminate duplicative requirements,” he said, including conflicts between FAA regulations and those of range operators.

“That is something that we feel is very, very important,” Powers said, citing the challenges of duplicative, conflicting regulations. “That is an important inefficiency right now that needs to be dealt with.”

There are several other aspects of FAA launch regulations that industry would like to see updated. Muncy said a working group of the FAA’s Commercial Space Transportation Advisory Committee identified updates to launch and reentry site regulations and liability regulations as priorities for the near future, as well as a new, streamlined process for environmental reviews.

“There’s a lot more to do,” he said. “There is absolutely no end to this.”