A test flight of SpaceX’s Starship launch vehicle is on hold as the company awaits approval from the FAA, a delay that has publicly aggravated the company’s chief executive.
SpaceNews 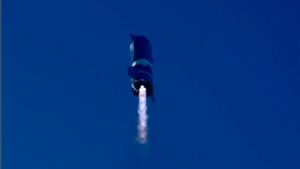 WASHINGTON — A test flight of SpaceX’s Starship launch vehicle is on hold as the company awaits approval from the Federal Aviation Administration, a delay that has publicly aggravated the company’s chief executive.

SpaceX had planned to perform a suborbital flight of its Starship SN9 vehicle at its Boca Chica, Texas, test site Jan. 28. The vehicle would have made a flight similar to that by the SN8 vehicle Dec. 9, this time going to an altitude of 10 kilometers before landing back at Boca Chica.

However, temporary flight restrictions (TFRs) closing airspace around the test site were unexpectedly lifted around the middle of the day, even as SpaceX was preparing the vehicle for the flight. A source familiar with the discussions between the FAA and SpaceX said that the agency requested additional information about the vehicle and flight plan before giving final approval.

SpaceX Chief Executive Elon Musk berated the FAA for the delay. “Unlike its aircraft division, which is fine, the FAA space division has a fundamentally broken regulatory structure,” he tweeted. “Their rules are meant for a handful of expendable launches per year from a few government facilities. Under those rules, humanity will never get to Mars.”

The company proceeded with launch preparations Jan. 28, leaving some to wonder if the company might perform a launch without a TFR in place or other FAA approvals. That turned out to be a wet dress rehearsal, with the vehicle fueled but the countdown halted before engine ignition.

A second launch attempt Jan. 29 did not get nearly as far. An FAA air traffic advisory early in the day stated that the launch had been canceled, although the TFR remained in place. By midmorning, though, SpaceX said it was now targeting no earlier than Feb. 1 for the SN9 launch.

Neither SpaceX nor FAA have disclosed additional details about the issue preventing FAA approval for the launch. “We will continue working with SpaceX to resolve outstanding safety issues before we approve the next test flight,” FAA spokesperson Steven Kuhn told SpaceNews Jan. 29.

The conflict between the FAA and SpaceX stands in contrast to the FAA’s public stance of working constructively with industry. That has included a streamlining of launch and reentry regulations the FAA concluded last fall. Those new regulations take effect 90 days after their official publication in the Federal Register Dec. 10.

At an appearance Jan. 26 at a space investment webinar by IPO Edge, Wayne Monteith, FAA associate administrator for commercial space transportation, said he understood the industry’s desire to move quickly. “As soon as that rocket’s ready to go and that payload’s ready to go, they want to go. So that we don’t become an impediment to the success of U.S. companies, we, as the primary regulator in this industry, have to be ready as well.”

Monteith said he was willing to talk directly with launch company executives if there were regulatory issues. “CEOs and presidents of companies also have my direct line. They can reach out to me directly if our teams are miscommunicating or not communicating well with each other,” he said. Issues that might take staff “weeks or months” to resolve, he said, “we can sometimes fix in a single phone call.”

“While nobody likes to be regulated, it’s important,” he said. “For one, it keeps everyone safe, and number two, it provides that stable environment for investors.”