SpaceX on Sept. 3 launched 60 Starlink internet satellites on a Falcon 9 rocket while disclosing early testing results from the constellation for which it has now launched 713 satellites.
SpaceNews 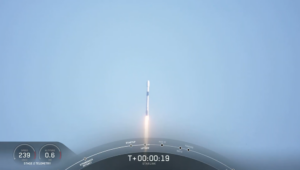 WASHINGTON — SpaceX on Sept. 3 launched 60 Starlink internet satellites on a Falcon 9 rocket while disclosing early testing results from the constellation for which it has now launched 713 satellites.

Falcon 9 lifted off at 8:46 a.m. Eastern from Launch Complex 39A at Cape Canaveral Air Force Station in Florida, and deployed the latest batch of Starlink satellites into low Earth orbit 15 minutes later.

The rocket’s reusable first-stage booster landed on the drone ship “Of Course I Still Love You,” located in the Atlantic Ocean. It was the booster’s second flight, following a June GPS-3 launch for the U.S. Space Force.

SpaceX plans to roll out a public beta of Starlink internet service later this year, but is for now testing the service with employees, Kate Tice, senior certification engineer at SpaceX, said during the launch webcast.

That testing demonstrated download speeds above 100 megabits per second, and “super low latency,” she said, though she did not quantify the latency.

“Our latency is low enough to play the fastest online video games, and our download speeds are fast enough to stream multiple HD movies at once and still have bandwidth to spare,” Tice said.

The Starlink megaconstellation, which could number 12,000 or even 42,000 satellites, remains “very much a work in progress,” she said. “Over time, we will continue to add features to unlock the full capability of that network.”

One new feature some Starlink satellites now have is inter-satellite links — a component SpaceX had said Starlink would have but for which it had not given an introduction date.

SpaceX completed a test with two satellites equipped with the crosslinks, which the company refers to as “space lasers.”

Inter-satellite links help lower latency, which could improve SpaceX’s odds of winning a share of the U.S. Federal Communications Commission’s $20.4 billion Rural Digital Opportunity Fund, meant to subsidize high-speed internet in the United States. SpaceX told the FCC in February that Starlink would have less than 50 milliseconds of signal lag.

SpaceX is already starting to deorbit older Starlink satellites that lack features added on later iterations. In the past 60 days, 10 Starlink satellites have deorbited — eight from bulk launches, plus the two TinTin prototypes — according to Celestrack, a service from Analytical Graphics Inc.

Another four Starlink satellites launched in 2019 have orbits below 200 kilometers, indicating they are imminently close to burning up in Earth’s atmosphere and deorbiting, T.S. Kelso, senior research astrodynamicist at AGI, told SpaceNews by email.

SpaceX has completed 16 launches in 2020, all using Falcon 9 rockets. Of those launches, 10 were for its own Starlink constellation.