A SpaceX Falcon 9 launched a new set of Starlink satellites and landed the booster March 4, two and a half weeks after the landing failed on the previous launch.
SpaceNews 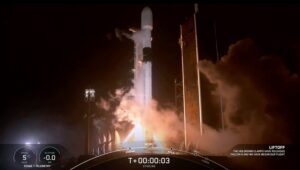 WASHINGTON — A SpaceX Falcon 9 launched a new set of Starlink satellites and landed the booster March 4, two and a half weeks after the landing failed on the previous launch.

The Falcon 9 lifted off from Launch Complex 39A at the Kennedy Space Center at 3:24 a.m. Eastern. The rocket deployed its payload of 60 Starlink satellites into orbit about 65 minutes after liftoff.

The Falcon 9 first stage successfully landed on a droneship in the Atlantic eight and a half minutes after liftoff. That booster was on its eighth flight, having previously launched the Telesat 18 Vantage communications satellite, the final batch of Iridium satellites and five sets of Starlink satellites.

The landing attempt was of particular interest because the previous Falcon 9 launch Feb. 15 failed to land the booster, breaking a streak of two dozen successful landings. A SpaceX official revealed March 1 that hot gas penetrated a small hole in a cover surrounding one of the stage’s nine Merlin engines, causing the engine to shut down during ascent. While the vehicle’s engine-out capability allowed the mission to continue, the failed engine meant the stage did not have enough thrust to perform a landing.

This latest launch appears to go normally, although in a break with past launches SpaceX did not provide video from cameras mounted on the first stage. The company didn’t explain the missing video in its webcast of the launch, but the lack of video from the rocket itself, combined with a low cloud deck, meant that the webcast viewers saw only a dark screen for most of the first stage’s flight.

The launch brings the total number of Starlink satellites launched to 1,205, although more than 60 of them have since deorbited. That includes three satellites on two launches last October that failed to raise their orbits after deployment, causing them to reenter within a couple weeks after launch.

SpaceX, in a Feb. 22 filing with the Federal Communications Commission, said that 720 of its last 723 satellites launched were “maneuverable above injection altitude,” but did not confirm the three that were not were those on the October launches.

SpaceX said it has “identified and corrected the root cause for the very few satellites that were non-maneuverable above injection altitude,” including improved testing of the satellites in the factory and updated software to other Starlink satellites in orbit. “These early cases have not recurred since the software updates were implemented, meaning that SpaceX’s corrections do not just address new and future satellites — they also protect satellites on orbit,” the company said in its FCC filing.

The filing was part of a docket on SpaceX’s request to modify its FCC license, allowing it to move satellites into lower orbits. Several other satellite operators oppose the request, primarily on concerns that the modified constellation will interfere with their systems. SpaceX again rejected those claims, and the FCC has not indicated when it will rule on SpaceX’s request.