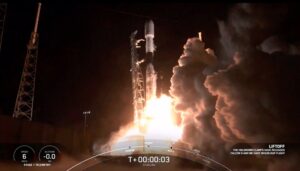 The rocket’s first stage landed on a droneship in the Atlantic Ocean eight and a half minutes after liftoff. The booster was on its fifth flight, having been used most recently for the launch of the Turksat 5A satellite Jan. 8.

The launch is the first of two back-to-back Falcon 9 Starlink missions from Florida. A second Falcon 9 is scheduled to launch Feb. 5 from Launch Complex 39A at the Kennedy Space Center, also carrying 60 Starlink satellites.

For a time, SpaceX planned launching both rockets Feb. 4, less than four and a half hours apart. The company said late Feb. 2 that the launch doubleheader was pending favorable weather and range approvals. While the 45th Space Wing announced Feb. 3 that it approved SpaceX’s launch plans, the company announced later that day it was delaying the launch from LC-39A, which had been scheduled for 5:36 a.m. Eastern, by a day for additional pre-launch checks.

The last time two launches took place from the Eastern Range, which includes Cape Canaveral Space Force Station and KSC, in a single day was in November 1966, with launches of NASA’s Gemini 12 mission and its Atlas Agena docking target 99 minutes apart. SpaceX proposed carrying out two Falcon 9 launches in one day in August 2020, but one of the two launches was scrubbed by weather.

This launch brings the total number of Starlink satellites in orbit to 1,022, according to statistics kept by Jonathan McDowell of the Center for Astrophysics | Harvard & Smithsonian. The company passed the milestone of 1,000 Starlink satellites launched last month, but more than 60 of those satellites have deorbited since their launches.