The U.S. Federal Communication Commission’s C-band auction of 280-megahertz of C-band has raised nearly $81 billion and it’s not quite over.
SpaceNews 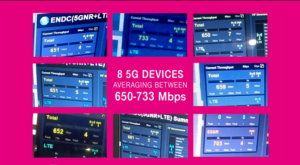 SAN FRANCISCO – The U.S. Federal Communication Commission’s C-band auction of 280 megahertz of C-band has raised nearly $81 billion and it’s not quite over.

Still to come is the assignment phase, where companies awarded spectrum blocks bid for frequency-specific licenses.

Prior to the auction, companies struggled to put a price tag on the bandwidth. ACA Connects, a collection of cable and internet providers, for example, suggested in 2019 that 500 megahertz of the prized mid-band spectrum could be worth as much as $60 billion. Instead the auction of 280 megahertz produced an $81 million windfall for the U.S. Treasury.

Musey attributes the high bids to the example T Mobile set in reusing spectrum to achieve high-speed internet access through a process called massive multiple-input, multiple-output (MIMO), “a fancy term for reusing the same radio resources for many users in the same cell at the same time — and beamforming — focusing a wireless connection in a specific direction,” T Mobile said in a 2020 news release.

The FCC has not yet released the names of the winning telecommunications bidders.

“T Mobile has been very successful in getting massive performance out of the 2.5 gigahertz spectrum that they acquired with Sprint,” Musey told SpaceNews. “The rest of the industry realized that they needed mid-band spectrum as well.”

In addition to paying for C-band spectrum, winners of the C-band auction are scheduled to pay about $13 billion to compensate satellite operators for clearing spectrum on an accelerated timeline.

The race to clear C-band spectrum prompted communications fleet operators Intelsat and SES to order a combined 13 satellites in 2020. Eutelsat and Telesat are clearing C-band spectrum over the United States by moving capacity in their current fleets.