NASA has selected Firefly Aerospace to deliver a set of 10 research payloads to the moon in 2023, the latest award in its Commercial Lunar Payload Services (CLPS) program.
SpaceNews 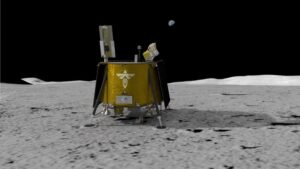 WASHINGTON — NASA has selected Firefly Aerospace to deliver a set of 10 research payloads to the moon in 2023, the latest award in its Commercial Lunar Payload Services (CLPS) program.

The agency said it awarded Firefly the CLPS Task Order 19D for sending 10 payloads to Mare Crisium, a basin on the moon’s near side, in 2023 for a mission lasting at least two weeks. The award is valued at $93.3 million.

The 10 payloads, with a total mass of 94 kilograms, include science experiments and technology demonstrations. They range from a probe to measure heat flow from the lunar interior and an X-ray imager to study the interaction of the Earth’s magnetosphere with the solar wind, to a demonstration of a radiation-tolerant computer system and an experiment to test the ability to use GPS signals at lunar distances.

Firefly will deliver the payloads using a lander called Blue Ghost, named after a rare species of firefly. The lander will launch on Firefly’s Alpha launch vehicle, slated to make its inaugural launch in the coming months, and use an upper stage called a Space Utility Vehicle (SUV) to go to the moon. In addition to the NASA payloads, the lander has about 50 kilograms of capacity for commercial payloads.

Firefly announced in July 2019 a partnership with Israel Aerospace Industries (IAI) to license the lander IAI developed for SpaceIL’s Beresheet mission, calling it Genesis. However, Blue Ghost is a new design developed internally at Firefly, according to Eric Salwan, director of commercial business development at the company.

“The NASA requirements evolved well beyond what Beresheet was sized for,” Salwan told SpaceNews, requiring “a much greater amount of payload, power and communications.” While Blue Ghost will be developed by Firefly, the company said IAI will still support the project in order to take advantage of lessons learned from Beresheet, which crashed attempting a lunar landing in April 2019.

“The CLPS 19D mission represents the third pillar in Firefly’s plan to become America’s premier end-to-end space transportation company,” Tom Markusic, chief executive of Firefly, said in a company statement. With the lander, Alpha rocket and SUV, “Firefly is poised to ensure U.S. preeminence in the commercialization of cislunar space.”

The award is the sixth overall in the CLPS program, but the first to Firefly, which was part of the original group of nine companies selected by NASA in November 2018 to be eligible to compete for CLPS awards. NASA added five companies a year later.

Astrobotic and Intuitive Machines won the first two CLPS award in 2019 for missions scheduled to launch later this year. Each won a subsequent award: the delivery of a NASA rover called VIPER in 2023 by Astrobotic and a drilling payload called PRIME-1 by Intuitive Machines in 2022. Masten Space Systems won a CLPS award in 2020 for a lander mission to the lunar south pole in 2022.

“We’re excited another CLPS provider has won its first task order award,” Thomas Zurbuchen, NASA associate administrator for science, said in an agency statement about the CLPS award. He was an early advocate for the program, calling for a “shots on goal” approach to such missions where NASA accepted that some fraction of the missions would fail.

By accepting that risk, though, NASA argued it was opening up new opportunities for low-cost transportation of payloads to the moon both for itself and other customers. “This allows U.S. vendors to not only demonstrate their ability to safely deliver payloads to our celestial neighbor, but also expand this capability for others who want to take advantage of this cutting-edge approach to explore the moon,” Zurbuchen said.

The CLPS award comes a day after Firefly revamped its board of directors. The company announced it added Deborah Lee James, former secretary of the Air Force, and Robert Cardillo, former director of the National Geospatial-Intelligence Agency, to its board. They will be joined on the board by Markusic. Max Polyakov, the Ukrainian entrepreneur who bought Firefly out of bankruptcy in 2017, will no longer serve on the board but remains the company’s largest shareholder.

“This award is further validation of Firefly, its team and its mission to become a versatile provider of a broad range of space-related services,” Polyakov said in a company statement about its CLPS award. “Our recently appointed board members bring the highest level of U.S. government expertise and provide strategic guidance to further strengthen the company as we move into this next phase of accelerated growth. It’s an exciting time.”