Former NASA astronaut Mark Kelly won his race for the U.S. Senate in Arizona Nov. 3 while two members of Congress involved in space issues lost their bids for reelection.
SpaceNews 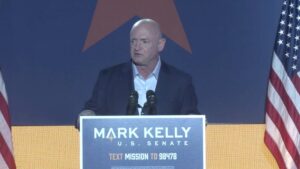 WASHINGTON — Former NASA astronaut Mark Kelly won his race for the U.S. Senate in Arizona Nov. 3 while two members of Congress involved in space issues lost their bids for reelection.

Kelly, a Democrat, defeated incumbent Republican Sen. Martha McSally by a margin of 52.6% to 47.4%, according to results published by the Arizona Secretary of State. The totals included both votes cast Nov. 3 as well as mail-in ballots.

Kelly is a former NASA astronaut who flew on four shuttle missions between 2001 and 2011, including as commander of the penultimate shuttle mission, STS-134, in May 2011. He retired from NASA after that final shuttle mission. He is married to Gabrielle Giffords, a former congresswoman and chair of the House space subcommittee who survived an assassination attempt in 2011.

During the campaign, Kelly did not discuss space policy, but did emphasize his experience as an astronaut as well as a U.S. Navy pilot. That included comments in a speech late Nov. 3 where he compared the campaign to training for a shuttle mission.

“This mission does not end when the last vote is counted. It is only the beginning. When I was at NASA, we would train for two years for a space shuttle mission,” he recalled. “Two years before we were on the launch pad ready to go, and then the work starts. And now, the work starts.”

Kelly joins an elite group of former astronauts who went on to serve in Congress. John Glenn, the first American to orbit the Earth, represented Ohio in the Senate for nearly a quarter-century, capping his Senate career with another flight to space on the STS-95 shuttle mission in 1998. Harrison Schmitt, who walked on the moon on the Apollo 17 mission, was elected to the Senate from New Mexico in 1976 but lost his bid for reelection in 1982. Jack Swigert, who flew on the Apollo 13 mission, was elected to the House from Colorado in 1982, but died of cancer before taking office.

Two current members of Congress involved in space policy lost bids for reelection. Rep. Kendra Horn (D-Okla.) lost to her Republican challenger, Stephanie Bice, by a margin of 52% to 48%. Horn was first elected to the House in 2018, and was widely seen as one of the more vulnerable Democratic House incumbents.

Horn served as chair of the House Science Committee’s space subcommittee, where she introduced a NASA authorization bill in January that would alter some aspects of NASA’s lunar exploration plans, notably how it develops lunar landers. The bill has yet to be reported out of the full committee, but Horn said Oct. 6 that she remained hopeful the House would take it up after the election.

Sen. Cory Gardner (R-Colo.) failed in his bid for a second term, losing to John Hickenlooper, a Democrat who formerly was governor of the state, by a margin of 53.9% to 44.0%. Gardner was involved in both civil and national security space issues, including raising questions at a recent NASA hearing by the Senate Commerce Committee about potential Chinese influence on U.S. space companies.

Gardner was a lead sponsor of a space weather bill called the Promoting Research and Observations of Space Weather to Improve the Forecasting of Tomorrow (PROSWIFT) Act that passed Congress and was enacted in October. The other lead sponsor, Sen. Gary Peters (D-Mich.), is trailing John James in his bid for another term. However, many ballots have yet to be tallied in Michigan, one of several states that also will decide the presidential election.