Some saw Jeff Bezos’ announcement that he will will step down as chief executive of Amazon in July as a sign that Bezos would use that time and energy to provide new urgency for Blue Origin.
SpaceNews 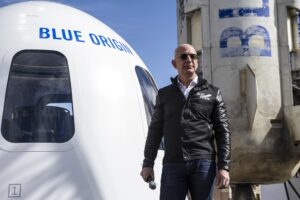 Back in the 1990s, space advocates had visions of reusable launch vehicles that would lower the cost of getting to orbit, opening the door to everything from space hotels to space solar power satellites. The problem, they argued at conferences as they showed viewgraphs of their designs, was not technical but financial: few were willing to invest in these ventures. If only Bill Gates, then the richest man in the world, would put his money into the industry, some lamented.

A quarter-century later, those enthusiasts got their wish and then some. Jeff Bezos and Elon Musk, the two richest men in the world, are at the forefront of the commercial space industry today. Reusable launch vehicles? SpaceX routinely lands and reuses its Falcon 9 boosters, while Blue Origin has demonstrated the reuse of its New Shepard suborbital vehicle. Both men have espoused ambitious long-term plans, from Bezos’ vision of millions of people living and working in space to Musk’s goal to establish a city on Mars.

And yet, all that is not quite good enough for some, particularly when it comes to Blue Origin. More than 20 years after Bezos quietly founded the company, it has yet to send a human into space or place a payload into orbit. SpaceX, by contrast, has launched more than 250 satellites, announced plans for private missions of its Crew Dragon spacecraft and launched (and crashed) a prototype of a next-generation vehicle — all since the first of the year.

That’s why there was so much industry interest in the announcement Feb. 2 that Bezos will step down as chief executive of Amazon in July, taking on a new role as executive chairman. In his announcement, Bezos said the move will give him “the time and energy I need to focus” on other projects, including Blue Origin.

Some saw the announcement as a sign that Bezos would use that time and energy to provide new urgency for Blue Origin. “He is going to kick Blue Origin into a higher gear,” an unnamed executive told Reuters, which headlined its article with the claim Bezos would shift Blue Origin “into hyperdrive.”

Those claims, though, are all vague on exactly what Bezos will do at Blue Origin. Bezos has never really been disengaged from Blue Origin, famously spending a day a week at the company and being its primary source of capital, to the tune of at least $1 billion a year in recent years. Short of installing himself as CEO and taking over day-to-day operations, it’s not clear what Bezos will be able to do to accelerate Blue Origin’s activities that he can’t do already.

Those comments reflect a sense of frustration with Blue Origin, which has fallen behind schedule on many of its projects. In an interview two years ago, Bezos said the company would start flying people to space “this year.” 2019 wasn’t the year, nor was 2020. The first launch of its New Glenn rocket, once expected in 2020, may now slip to 2022. Yet Blue Origin is hardly the only space company to suffer development delays; it’s not even the only suborbital spaceflight company (hello, Virgin Galactic.) Even SpaceX, amid its manic launch activity, has had schedules slip for many of its projects.

Bezos has taken the long view at Blue Origin, and the company has been working in recent years on the infrastructure needed for its long-term plans: a new headquarters near Seattle, an engine factory in Alabama and a New Glenn manufacturing facility in Florida, where it’s also building a launch complex for that rocket. Eventually it needs to use that infrastructure to execute those plans, but seems willing to do so at its own pace, or at least the pace of its founder.

Blue Origin’s motto is “Gradatim Ferociter,” or “step by step, ferociously.” The company has lived up to the first word of that motto, moving deliberately, but gradually. We’ll soon see if Bezos adds some ferociter to his company.

Jeff Foust writes about space policy, commercial space, and related topics for SpaceNews. His Foust Forward column appears in every issue of the magazine. This column ran in the Feb. 15, 2021 issue.