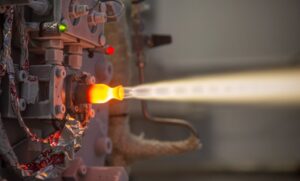 “We are well on our way to qualifying both 150 and 10 [pounds of thrust] engines for Astrobotic’s near-term Peregrine lunar lander mission,” Frontier Aerospace announced Nov. 2 on LinkedIn.

Frontier Aerospace has been developing and testing rocket engines fueled by nitrogen oxides mixed with monomethyl hydrazine propellants through a NASA program called Thruster for the Advancement of Low-temperature Operation in Space (TALOS).

The TALOS program is aimed at reducing space mission costs by developing propulsion technologies to operate at a wide range of temperatures, from -40 to 27 degrees Celsius. In contrast, existing liquid propulsion thrusters operate in a far more limited temperature range, from about 7 to 21 degrees Celsius, according to an Aug. 21 NASA news release.

Frontier Aerospace completed critical design review in late October of the TALOS thrusters. “We are now in the process of fabricating qualification test hardware for one of NASA’s Artemis flights on Peregrine, which is set to fly on [United Launch Alliance’s first Vulcan rocket,” Dabbs said.

Frontier Aerospace won a $1.9 million NASA Tipping Point award in 2018 to flight qualify thrusters for Astrobotic’s first Peregrine lunar lander flight, now scheduled for 2021. The Frontier Aerospace thrusters will be integrated in the propulsion system developed by Dynetics of Huntsville, Ala., to propel Peregrine through trans-lunar injection, lunar orbit insertion decelerations, a breaking maneuver and powered descent to the lunar surface.

Since McKinnon established Frontier Aerospace in 2014, the company has been developing bipropellant thrusters for spacecraft and lunar landers.

“For decades, there have been limited breakthroughs within the in-space propulsion market,” Andy Ferng, Frontier Aerospace vice president and program manager, said by email. “We’re fortunate to have a team of relentless innovators focused on pushing the limits of space propulsion.”