Proponents of a proposed Georgia launch site remain optimistic they will win approval from the Federal Aviation Administration despite another delay in the environmental review process.
SpaceNews 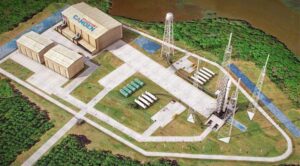 WASHINGTON — Proponents of a proposed Georgia launch site remain optimistic they will win approval from the Federal Aviation Administration despite another delay in the environmental review process.

The FAA’s Office of Commercial Space Transportation informed stakeholders in the ongoing assessment of Spaceport Camden in Camden County, Georgia, March 5 that a final version of an environmental impact statement (EIS) will not be completed this month as previously planned. The agency said it needed more time to complete consultation with two Georgia state offices involved with historic preservation.

The FAA said is now expects to release the final version of the EIS by April 20. That will be followed by a formal “record of decision” on the spaceport’s application for an FAA launch suite operator’s license by June 18.

The proposed spaceport, on the site of a long-defunct Thiokol rocket motor facility, has attracted strong opposition from environmental groups, as well as residents of nearby Cumberland Island, who feared damage to property and a national seashore in the event of a launch accident. The U.S. Navy also expressed concerns about risks to the nearby Naval Submarine Base Kings Bay.

The spaceport originally targeted small to medium-sized launch vehicles, but in December 2019 revised its FAA license application to focus solely on small launch vehicles. That change required a revamp of the environmental assessment.

Despite the delays and opposition, spaceport backers remain confident that they will eventually win approval. “This will be the most vetted spaceport probably of all time,” said Steve Howard, commissioner of Camden County, in a March 8 online presentation at a meeting of the Rotary Club of Atlanta. “That’s good. The due diligence is important.”

“We’re looking forward to the conclusion of the environmental impact statement,” he said, arguing that other launch sites, like the Kennedy Space Center in Florida and Wallops Flight Facility in Virginia, have demonstrated that launch sites can coexist with nature preserves. “It is an amazing opportunity for the environment. It is a win-win.”

Howard said little about the environmental review in his presentation, which focused on the economic opportunity that he argued the spaceport offered to the region. “This is a once-in-a-generation opportunity. We’re at the right place at the right time,” he said.

It’s unclear, though, who would use the spaceport if it is approved. Vector Space Systems performed a low-altitude test of a small launch vehicle there in 2017, but the company later went bankrupt. ABL Space Systems announced plans to establish a test site for its small launch vehicle there, but ended up doing testing elsewhere as it prepares for a first launch as soon as this spring from California.

Howard, along with Robert Dickman, a retired Air Force general who is an adviser to the spaceport, argued that Spaceport Camden would be an alternative to Cape Canaveral for small launch vehicles. “Spaceport Camden will offer that small rocket a place to launch that’s less expensive and less bureaucratic than the government facilities,” Dickman, a former commander of the 45th Space Wing that operates the Eastern Range, said.

“Cape Canaveral is out of room. Spaceport Camden can relieve some of that pressure,” Howard said.

“So far we haven’t turned anyone away,” Bob Cabana, director of KSC, said during a panel discussion at the 47th Spaceport Summit last month. “We’ve managed to work all our agreements with the folks who want to be a part of this spaceport.”

Another small launch vehicle developer, Rocket Lab, elected to develop a launch facility at Wallops for its Electron rocket. Last week, the company said it will also use Wallops for its new Neutron medium-class rocket, including building a factory for the rocket close to the launch site to minimize transportation issues.

Despite the moves by other companies to launch from Florida or Virginia, Howard said he’s convinced Camden can be an ideal launch site for as-yet-unannounced customers. “I think it’s ours to lose,” he said of the prospects for the proposed spaceport. “I’ve been told by a lot of folks this is the best real estate for a spaceport on the East Coast.”