The four-satellite NetSat mission launched Sept. 28 on a Russian Soyuz rocket is designed to showcase technology for formation flight.
SpaceNews 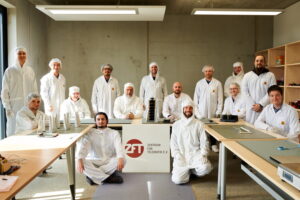 If successful, NetSat will “demonstrate formation flight in a three-dimensional configuration for the first time worldwide,” Klaus Schilling, University of Wurzburg robotics and telematics chair, told SpaceNews by email. “This promises huge potential for innovative approaches to future satellite systems in Earth observation and telecommunications.”

In addition, the NetSat mission may reveal collision avoidance strategies, added Schilling, who is also the NetSat principal investigator.

The cubesats rely on intersatellite links to exchange navigation and control information. Each four-kilogram cubesat also is equipped with a single electric thruster and reaction wheels to point the thruster in the appropriate direction, Schilling said.

It’s not rare for two satellites to fly in formation like the U.S.-German Gravity Recovery and Climate Experiment and the University of Toronto Institute for Aerospace Studies Space Flight Laboratory’s two-satellite Canadian Advanced Nanospace eXperiment-4 and -5.

As far as the Center for Telematics can tell, however, no organization has succeeded in operating four satellites in a three-dimensional formation, Schilling said.

Prior to launch, the Center for Telematics won contracts to apply its formation-flying technology to Telematics Earth Observation Mission, an Israeli-German effort to generate 3D maps of Earth’s surface features, and to CloudCT, a campaign to collect detailed images of the external and internal structures and properties of clouds.

The NetSat cubesats traveled to orbit alongside three Russian Gonets telecommunication satellites and more than a dozen small satellites. Exolaunch coordinated shipment of the satellites to launch site, as well as integration and deployment in orbit.