Mynaric will not be able to launch its first laser communications terminal this year because of a German ban on exporting that technology to China, the company said Monday.
SpaceNews 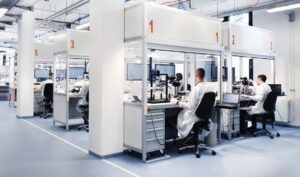 WASHINGTON — Mynaric will not be able to launch its first laser communications terminal this year because of a German ban on exporting that technology to China, the company said Monday.

Munich-based Mynaric anticipated launching its first laser terminal aboard a Chinese spacecraft later this year, but received a notice from the German government in July regarding an export ban on such technology to China. Mynaric, in a Sept. 14 letter to shareholders, said it is “assessing potential claims for compensation,” in the wake of the ban.

“We always anticipated laser communication being recognized as a key technology underpinning strategic national interest and this recent political intervention in our business and market proves this is the case,” Bulent Altan, Mynaric chief executive, said in the letter.

Mynaric spokesman Paul Cornwell​ said the company’s first generation “Condor” space laser terminal is “ready for shipment as and when it will be needed by customers.” He declined to give a launch date for the first Condor terminal.

Mynaric said it now views the government and defense sector, particularly in the United States, as the first market where its laser terminals will be applicable. The company said Sept. 4 that its Los Angeles subsidiary Mynaric USA was selected to provide laser terminals to an undisclosed customer for a U.S. government program.

An estimated 6.5% of the work for York Space System’s $94 million contract will be performed in Los Angeles, according to the Space Development Agency.

Some 10.6% of the work for Lockheed Martin’s $187.5 million contract will be conducted in Backnang, Germany, where a competing laser communications company, Tesat Spacecom, is based. Tesat Spacecom said Sept. 4 it received an order to supply optical intersatellite links for 10 satellites to a U.S. satellite manufacturer.

Altan said Mynaric grew by more than 50% in the first six months of 2020, from 95 employees to more than 150 across Europe and the United States. In August, Mynaric announced the appointment of a former Yahsat executive, Tina Ghataore, to lead its U.S. subsidiary in Los Angeles.