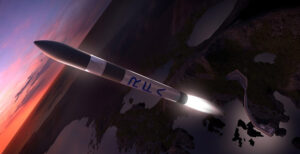 Rocket Factory Augsburg, founded in 2018 as the launch arm of German space technology company OHB SE, is in the process of developing its three-stage RFA One rocket. The small-satellite launch vehicle features a multi-engine first stage design powered by nine liquid-fueled engines plus single-engine second and orbital stages.

Lifting off from Norway’s arctic spaceport, the rocket will be capable of carrying up to 1,300 kilograms of payload to a 300-kilometer polar orbit, according to Rocket Factory Augsburg spokesman Ibrahim Ata.

On Sept. 24, Rocket Factory Augsburg signed a memorandum of understanding with Andøya Space — a sounding rocket range 90% owned by Norway’s Ministry of Trade, Industry and Fisheries — to offer end-to-end launch services for small satellites aboard the RFA One from a new orbital launch facility.

Construction of the new facility is expected to begin later this year on the island of Andøya 35 kilometers south of the Andøya Space suborbital launch facility. The location of the new facility was selected following a four-year process that assessed several available options and included environmental studies, safety analysis, and an examination of the feasibility of access to the site.

The Andøya Spaceport is expected to feature independent integration facilities, access to two launchpads, and all the necessary support infrastructure. The spaceport plans to attract three to four launch partners of which Rocket Factory Augsburg is the first, Enoksen said.

The Norwegian spaceport is an ideal choice for the company’s RFA One, said Ata. The government-backed 365-krone investment, large safety zone, and ease of access to SSO and polar orbits were all significant contributors to the company selecting Andøya.

The first Andøya Spaceport launchpad is expected to be ready toward the end of 2021. The second pad will follow in 2022 with the facility reaching full operational capabilities by 2023, Enoksen said.

In addition to signing a memorandum of understanding with Andøya Space, Rocket Factory Augsburg announced Sept. 29 it had also concluded a major part of the initial planning phase required to construct a launch site for the RFA One at Europe’s Guiana Space Centre in Kourou, French Guiana.

Rocket Factory Augsburg  counts Munich-based private equity firm Apollo Capital Partners as a backer and is currently in the process of applying for funding under Boost!, an ESA program that aims to foster new commercial space transportation services.