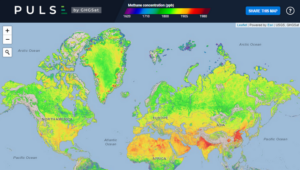 GHGSat’s map, called Pulse, shows changes in methane concentrations measured in parts per million or parts per billion for each pixel during the year.

“We hope that Pulse will raise awareness, stimulate discussion and lead people to ask questions,” Stephane Germain, GHGSat founder and CEO, said during a press briefing. “Pulse is deliberately designed not to identify hotspots or to attribute emissions to any particular source. If people want more detail, we offer 25-meter imagery for sale.”

“If people want to see hotspots or find emission sources, we offer those services for sale as well,” Germain said.

The company needs ten satellites to provide customers with “regular measurements for all their facilities in these areas of production,” Germain said.

The government “satellites that are 100 times bigger and more expensive than ours, but they have the benefit of being able to generate data for the entire planet every day,” Germain said. “They do it in a coarser resolution. So we combined their data with ours in order to get these maps and have that kind of accuracy that we all want in specific areas.”

“Methane has a global warming potential that is 84 times that of carbon dioxide,” Gallagher said during the press briefing. “We need to know when, where and how methane goes into the atmosphere. Reducing methane emissions is an important tool for addressing climate change.”

GHGSat created the first generation of Pulse with data from its first satellite Claire.

“We are already working on the next generation which will show the amount of methane per day emitted or absorbed per pixel,” Germain said.

GHGSat announced plans to map methane emissions around the world at the World Economic Forum in January in Davos, Switzerland. At the time, GHGSat said it would release the map in time for the United Nations Climate Change Conference, the 26th Conference of Parties, originally scheduled to begin Nov. 9 in Glasgow, Scotland. Because of the COVID-19 pandemic, the Conference of Parties has been delayed until November 2021.

“It is being delayed like many things this year,” Germain said. “There will nevertheless be a virtual event this year and we wanted to honor that commitment.”