A recent NASA mission successfully demonstrated the performance of a non-toxic “green” propellant, creating opportunities for its use in a wide range of future spacecraft.
SpaceNews 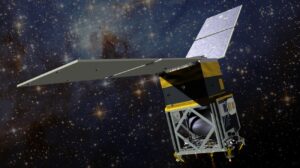 WASHINGTON — A recent NASA mission successfully demonstrated the performance of a non-toxic “green” propellant, creating opportunities for its use in a wide range of future spacecraft.

NASA flew the Green Propellant Infusion Mission (GPIM) spacecraft as one of the payloads on the Space Test Program 2 mission that launched on a SpaceX Falcon Heavy in June 2019. The spacecraft’s mission ended when it reentered in October 2020 after a series of deorbiting maneuvers.

The purpose of GPIM was to perform an in-space demonstration of a green propellant developed by the Air Force Research Laboratory (AFRL) called AF-M315E. That propellant was designed to have performance similar to hydrazine, commonly used on spacecraft, but without the toxicity and handling issues associated with hydrazine.

The spacecraft met its performance goals, said Trudy Kortes, program director of technology demonstrations in NASA’s Space Technology Mission Directorate (STMD), during a panel discussion about the mission during this month’s SciTech Forum by the American Institute of Aeronautics and Astronautics. That included a “stretch goal” of pulsing the thrusters more than 10,000 times.

The flight was the culmination of decades of work on developing and ultimately flight-testing this green propellant. “We were thinking that maybe as early as 2002 we could do a demo of this propellant,” recalled Jeff Sheehy, chief engineer at STMD who previously worked on advanced propellants like AF-M315E at AFRL. “In retrospect, of course, we were way too optimistic about how long it takes to get a new propellant to the point where it’s ready to demonstrate.”

Part of that work involved testing how the propellant interacted with various materials. “We had decades of experience with hydrazine with different materials, but we had no idea how this stuff was going to behave,” said Joe Cassady, executive director of space programs for Aerojet Rocketdyne’s Washington office. Aerojet developed the propulsion system flown on GPIM that used AF-M315E. Some materials, he said, had to be changed in order to use the green propellant.

Engineers also had to test how the propulsion system would interact with other spacecraft systems. Unlike hydrazine, AF-M315E created a significant amount of water as a byproduct. That created concerns the water could deposit on optical surfaces on the spacecraft, like star trackers, said Chris McLean, principal investigator for GPIM at Ball Aerospace, requiring modeling and testing on the ground before flight.

With the propellant successfully tested, those involved with the mission are optimistic about the its potential for future missions. It also has a new, easier-to-remember name: Advanced Spacecraft Energetic Non-Toxic, or ASCENT.

Adam Brand, advanced propellant development lead at AFRL, said his group is looking at variants of ASCENT. “We consider ASCENT a family of propellants,” he said. “There are different blends for different purposes, different types of missions.” Since ASCENT is a liquid salt, he said one potential use of the propellant is in a type of electric propulsion system called an electrospray thruster.

Cassady said Aerojet is using its GPIM to develop over thrusters that use versions of ASCENT, with a particular focus on smallsats. One example is a system that fits into one unit of a cubesat. “If you had a 3U cubesat, you could attach this to it, take up one of the three units, and have 2U available for the payload,” he said. A larger version is designed for 12U cubesats.

He said smallsats present an opportunity for green propellants, since they can enable smallsats to fly propulsion systems without less overhead than those that use propellants like hydrazine. “The lower toxicity plays into this,” he said, especially for smallsats flying as secondary payloads. “By having a low-toxicity propellant, that enables a lot smoother process for getting approvals.”

It can also simplify spacecraft launch preparations. “It’s an opportunity to fuel the spacecraft at the manufacturer’s facility and take it out to the launch pad and just pressurize the tank,” he said. ASCENT avoid the issues associated with shipping a hydrazine-fueled spacecraft, and is earlier to deal with in general. “There’s all these intangibles associated with handling the fuel.”

Panelists said there may be more exotic uses of the fuel, from concepts for Mars missions that benefit from ASCENT’s tolerance to low temperatures to use in missiles. “We have at least five different customers we’re in the process of building this kind of technology for,” Cassady said. “We’ll see it flying in the next two to three years on most of those missions.