The commander of U.S. Strategic Command Adm. Charles Richard said the Pentagon has to procure a new intercontinental ballistic missile and updating Cold War-era systems is not an acceptable option.
SpaceNews 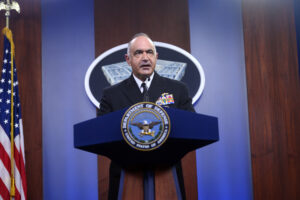 WASHINGTON — The commander of U.S. Strategic Command Adm. Charles Richard said the Pentagon has to procure a new intercontinental ballistic missile and updating Cold War-era missiles is not an acceptable option.

“You cannot life extend the Minuteman 3,” Richard told reporters Jan. 5 in a Zoom conference hosted by the Defense Writers Group.

Richard’s comments were in reaction to calls for the Biden administration to reconsider a massive Pentagon investment in the Ground Based Strategic Deterrent (GBSD) intercontinental ballistic missile. The GBSD is the follow-on to the Minuteman 3 ICBM that first became operational in 1970.

The Air Force in September awarded Northrop Grumman a $13.3 billion contract to develop the GBSD over the next seven years. The program will cost tens more billions of dollars over the next two decades.

The Biden administration in the coming year is expected to review the Pentagon’s nuclear weapons budgets and modernization strategy. A coalition of progressive anti-war think tanks has urged Biden to make deep cuts in military spending and consider terminating GBSD.

Richard said he welcomes the Biden review but argued that trying to save money by refurbishing the Minuteman 3 is unreasonable.

“I don’t understand frankly how someone in a think tank who actually doesn’t have their hands on the missile, looking at the parts, the cables, all the pieces inside” is qualified to make such recommendations, Richard said.  The Minuteman 3 is past the point where it can be modernized, he insisted. “That thing is so old that in some cases the drawings don’t exist any more.” Any drawings that still exist are so old that the people who can understand them are not alive any more, he said.

Richard said he has briefed the Biden transition team but did not provide details.

Richard said the classified NC3 system is decades old but works and is cyber secure. It includes a mix terrestrial and space-based sensors that monitor the globe for threats, and a communications architecture that connects the nation’s decision makers to nuclear forces under any conditions.

Strategic Command stood up an NC3 Enterprise Center to coordinate modernization efforts. Congress in the 2021 National Defense Authorization Act expressed concerns about the cybersecurity of NC3 and directed the Pentagon to report back by October 2021 on the status of the program.