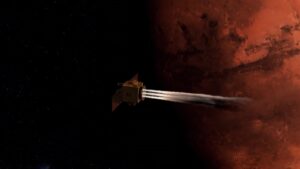 The Mars orbit insertion (MOI) maneuver was designed to place the spacecraft into an orbit of 1,000 by 49,380 kilometers around Mars, but the center did not immediately confirm the spacecraft’s orbital parameters.

“MOI was the most critical and dangerous part of our journey to Mars, exposing the Hope probe to stresses and pressures it has never before faced,” Omran Sharaf, project director for what’s formally known as the Emirates Mars Mission, said in a statement. “With this enormous milestone achieved, we are now preparing to transition to our science orbit and commence science data gathering.”

The spacecraft will spend the next two months moving into its final science orbit at altitudes ranging from 20,000 to 43,000 kilometers above the planet. The orbit is designed to allow the spacecraft’s instruments to capture full views of the planet’s atmosphere every nine days to support studies of Martian weather patterns as well as how gasses in the planet’s atmosphere escape to space.

Hope is the UAE’s first mission beyond Earth orbit, and the UAE is only the fifth entity to successfully place a spacecraft into orbit around Mars, after the United States, former Soviet Union, European Space Agency and India. The mission was timed in part to commemorate the 50th anniversary of the country later this year.

“As a young nation, it is a particular point of pride that we are now in a position to make a tangible contribution to humanity’s understanding of Mars,” Sarah Al Amiri, UAE minister of state for advanced technology and chair of the UAE space agency, said in a statement. “This also marks an important point for the Emirates to continue the drive to diversify its economy utilizing science and technology.”

The UAE worked closely with several universities in the United States on the mission, including the University of Colorado Boulder, University of California Berkeley and Arizona State University, including on the spacecraft itself as well as its suite of three instruments.

“Hope will capture the ebbs and flows of weather on Mars to a degree that wasn’t possible before. It’s a showcase for how space exploration has become an increasingly international endeavor,” said Daniel Baker, director of the Laboratory for Atmospheric and Space Physics at the University of Colorado, in a statement before Hope’s arrival at Mars.

Hope, which launched July 19 on a Japanese H-2A rocket, is the first of three Mars missions launched last July arriving at Mars this month. China’s Tianwen-1 mission is scheduled to enter orbit around Mars Feb. 10, although the Chinese government has said little about the spacecraft’s upcoming arrival. The spacecraft will deploy a lander, carrying a rover, to touch down in the Utopia Planitia region of Mars in May.

NASA’s Mars 2020 mission will arrive at Mars Feb. 18, landing the Perseverance rover in Jezero Crater. Perseverance will study the planet’s past habitability and cache samples for return to Earth by two NASA and ESA missions scheduled for launch no earlier than 2026.