As the United Arab Emirates’ Hope spacecraft arrives at Mars, those involved with the mission have a mix of confidence and concern about the chances of successfully entering orbit.
SpaceNews 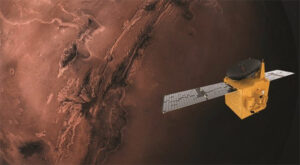 WASHINGTON — As the United Arab Emirates’ Hope spacecraft arrives at Mars, those involved with the mission have a mix of confidence and concern about the chances of successfully entering orbit.

The Emirates Mars Mission, or Hope, spacecraft will arrive at Mars Feb. 9, entering orbit at about 10:41 a.m. Eastern. The spacecraft will fire its main thrusters for 27 minutes to slow it down enough for the planet’s gravity to capture the spacecraft into orbit.

The maneuver is one of the most critical phases of the mission after its launch in July 2020. Failure to perform the maneuver as planned could prevent the spacecraft from entering orbit or even cause it to collide with the planet, as happened with NASA’s Mars Climate Orbiter mission in 1999.

“This is a heavily rehearsed, designed, tested maneuver,” said Sarah Al Amiri, UAE minister of state for advanced technology and chairperson of the UAE Space Agency, during a Feb. 1 webinar. “But we have never used our thrusters for 27 minutes continuously. We’re going to burn half of our fuel.”

“Seven years’ worth of work involving a team of amazing individuals from several continents rests on the fate of Mars orbit insertion, which is not an easy maneuver,” she said, describing her mixed feelings as “comfortable and uncomfortable, worried and not worried.”

Others involved in the Hope mission are more confident. “The spacecraft is very healthy,” said Pete Withnell, program manager for the Emirates Mars Mission at the University of Colorado’s Laboratory for Atmospheric and Space Physics (LASP), which worked with the UAE to assemble the spacecraft and provided some of its instruments. The spacecraft is also on its planned trajectory, he said during a Jan. 28 briefing.

The thrusters that will be used for the orbit capture maneuver have been tested many times for short burns, including course corrections after launch. The key, he said, is to start the maneuver on time. “That is most likely the riskiest part of the maneuver.”

“This is a highly practiced, highly simulated, highly analyzed event,” he said. “I cannot imagine being better prepared than we are right now. We are very fortunate to have a very healthy spacecraft, and everything is looking very good at the moment. I’m optimistic.”

Those preparations do come with some stress. Withnell described engineers waking up in the middle of the night “in a cold sweat, thinking and rethinking” aspects of the mission. “That’s healthy for the mission, but not so healthy for the individuals.”

Should Hope make it into orbit, it will use its suite of three instruments to provide a comprehensive view of the Martian atmosphere, including tracking the planet’s weather and studying processes by which gasses escape the atmosphere into space.

Those studies will begin later in the year, once the spacecraft maneuvers into its final orbit between 20,000 and 43,000 kilometers in altitude. The orbit will allow the spacecraft to capture a complete view of the planet’s atmosphere, across the planet and at different times of day, every nine days.

“There’s about to be a fire hose of data headed my way,” said David Brain, deputy science lead for the mission at LASP. Like Withnell, he felt optimistic about the upcoming orbit insertion maneuver. “There’s a chance that it might not go well, and we’ll deal with that if it happens.”

The mission is a flagship for the UAE’s young space program, demonstrating its capabilities and serving as a symbol of the country’s technological achievements, both for its citizens and those in the Gulf region. The mission coincides with the UAE’s 50th anniversary.

“We’re seeing a lot of excitement” in the country, said Al Amiri, including billboards counting down until Hope’s arrival at Mars. “There’s a lot of support.”

The mission is the first of three arriving at Mars this month, and will be followed Feb. 10 by China’s Tianwen-1 spacecraft, which will go into orbit before deploying a lander with a rover, likely in May. NASA’s Mars 2020 mission will land the rover Perseverance on Mars Feb. 18.

Simply getting Hope built and launched, particularly amid the disruptions of the pandemic, was a major achievement, but Al Amiri said she wasn’t ready to declare Hope a success even if it does make it into orbit. “For me to declare mission success is very hard to do,” she said. “It’s a continuous learning experience. It’s a continuous mission.”