The House of Representatives passed legislation Dec. 16 to protect Apollo-era artifacts on the moon and to rename another NASA facility after the first man to walk on the moon.
SpaceNews 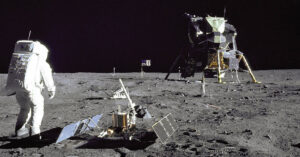 WASHINGTON — The House of Representatives passed legislation Dec. 16 to protect Apollo-era artifacts on the moon and to rename another NASA facility after the first man to walk on the moon.

The House passed on a voice vote S. 1964, the “One Small Step to Protect Human Heritage in Space Act.” The bill was introduced last year in the Senate by Sens. Gary Peters (D-Mich.) and Ted Cruz (R-Texas), where it passed it by unanimous consent around the time of the 50th anniversary of the Apollo 11 mission in July 2019.

The bill is intended to protect hardware and other artifacts left behind by the Apollo lunar landings and other U.S. government lunar landings by putting legal force behind a set of voluntary guidelines NASA published in 2011 regarding best practices for preserving those sites. NASA released those guidelines during the Google Lunar X Prize competition, when several teams were contemplating lunar landing missions that would potentially approach Apollo sites.

Those Apollo sites “tell the story of humankind’s extraordinary journey to the moon. They have historical, archaeological and inspirational value, and it’s up to us to work to protect them,” said Rep. Kendra Horn (D-Okla.), chair of the House space subcommittee, in remarks on the House floor about the bill.

The original Senate version of the bill would have directed any federal agency that licenses a lunar activity to require the licensee to agree to abide by NASA’s guidelines. However, the bill taken up by the House modifies that language, instead requiring NASA to require compliance with those guidelines in its contracts, grants and other agreements with companies and other organizations, such as participants in the Commercial Lunar Payload Services program.

“The bill does not create any additional regulatory authority,” said Rep. Brian Babin (R-Texas), ranking member of the space subcommittee, in his remarks on the bill. “Instead, the bill offers a carrot, rather than a stick. If the private sector wants to leverage the vast experience and resources that NASA offers, they simply must abide by NASA’s own internal policies.”

Plum Brook Station, operated by NASA’s Glenn Research Center, is best known for thermal vacuum chambers and other facilities used to test spacecraft and launch vehicles, such as the Orion spacecraft. Members argued it made sense to name the center after Armstrong, an Ohio native.

“It is truly appropriate that a world-class aerospace test facility in the state of Ohio be named for a native son and one of the world’s most accomplished and dedicated pilots,” Horn said.

The swift passage of the two bills in the House marked something of a farewell for Horn, who lost reelection in November after serving one term. “Her tenure as chairwoman of the space and aeronautics subcommittee was marked by significant change and accomplishments by our nation’s space program,” Babin said, thanking Horn for her “steady and fair treatment for all members’ interests.”

“It’s truly been an honor to be able to work with you on these issues,” Horn responded. “Space is one of those areas where it is, and should be, bipartisan, where we can come together for the best interests of our nation to continue to advance discovery and to encourage innovation.”