U.S. Rep. Doug Lamborn (R-Colo.), a co-chair of the recently established House Space Force Caucus, said Oct. 28 that orbital debris is a major threat to a prosperous space economy and that better space situational awareness is crucial to protecting the sector.
SpaceNews 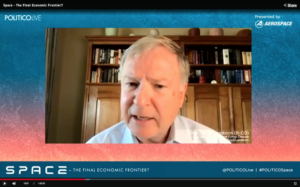 U.S. Rep. Doug Lamborn (R-Colo.), a co-chair of the recently established House Space Force Caucus, said Oct. 28 that orbital debris is a major threat to a prosperous space economy and that better space situational awareness is crucial to protecting the sector.

“I think space debris and situational awareness, the need to deconflict, is a huge thing,” said Lamborn, who is also a member of the House Armed Services Committee, when asked during a Politico Live webcast to name the biggest obstacles to a flourishing space economy. “The ability of a small bit of debris to ruin a very expensive satellite or cripple a satellite — that’s undeniable.”

Lamborn said the federal government “has really been working hard on this and pouring a lot of money into space situational awareness.” But he also asserted that U.S. regulations could improve and that questions remain about international cooperation when it comes to maintaining a safe orbital environment, including whether treaties are necessary.

“The ability of private companies to put satellites in orbit and making sure that they’re doing it in a proper way, I think domestically needs to be better regulated,” Lamborn said. “And, internationally, there is going to be, I’m sure, talk of treaties. I just want to make sure in any treaties going forward that we’re not compromising our security or sovereignty because certain countries have a history of trying to do a treaty that handcuffs American abilities to protect its national security. But, internationally, we have to be at least exploring that option as well.”

The Federal Communications Commission issued a draft of revised orbital debris mitigation regulations in April that met industry resistance, prompting the FCC to defer action on the more controversial regulations.

While Lamborn said he wasn’t aware of any efforts in the House to roll out a similar bill, he said he is supportive of Commerce taking on SSA, debris tracking and deconfliction responsibilities.

“Commerce may have to add more people and funding and resources to accomplish that [mission], but I think that that takes one thing off the table for DoD, so they can concentrate on the security side — protecting our satellites and making sure that any threats can be beaten back if it should ever materialize,” he said.

For fiscal year 2021, the Trump administration asked Congress to set aside $15 million for the Commerce Department’s Office of Space Commerce, in part to fund a transition of civil space traffic management responsibilities. Wicker’s legislation would authorize that amount of funding, while also promoting Space Commerce from an office to a bureau.

A spending bill that passed the House in July rejected the president’s $15 million request for the office, with appropriators saying they were awaiting a study that Congress had commissioned on the matter. That study, which was released in August by the National Academy of Public Administration (NAPA), concluded the Office of Space Commerce was the best agency to handle space traffic management The Commerce Department is hoping that the NAPA study’s endorsement will shore up support for the funding when Congress finally takes up FY-21 appropriations.

Lamborn is one of six inaugural members of the bipartisan House Space Force Caucus, which launched Oct. 20. The Colorado Republican has said that the group will be “chief advocate” for the new military service.

Asked how the upcoming presidential election could affect space policy, Lamborn stressed during the Politico Live event that space is a bipartisan issue.

Space debris is not only a national security matter but also a point of concern for investors, SpaceFund managing partner Meagan Crawford noted during the webcast.

“Orbital traffic management is a real issue — that combined with debris is making some people hesitant to do business, to invest in constellations [of satellites] when there’s still so many unknowns and so many dangers there,” Crawford said, speaking on a separate panel of industry experts. “And so I do see some hesitancy around some of those issues, but not enough that investment isn’t continuing to grow at an increasing pace in the industry.”

To address concerns about orbital debris, cybersecurity and other issues, Crawford called for “some sort of entity that crosses the public-private sphere and that can help create these rules and enforce them with the help of groups like Space Force, with the help of other entities and other countries.”

Crawford said there could be “economic solutions,” such as establishing the right to salvage debris and convert it into an asset. But for now, “we really need to start thinking about some sort of governing body,” she said.